OPINION: The End of the Eastland Machine 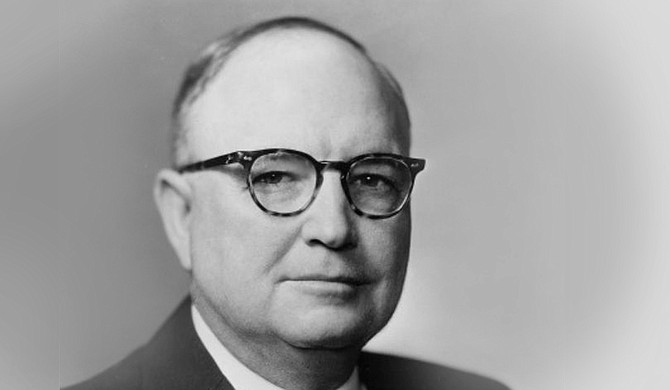 The late Brad Dye, Mississippi lieutenant governor from 1980 to 1992 after stints as state treasurer, other offices and in 1954, was a driver for U.S. Sen. James O. Eastland (pictured) during his re-election campaign. Photo by Public Domain

OXFORD—A politician friend came up to me at a restaurant the other day, shook his head slowly, and said in hushed tones, “Well, that’s the end of the Eastland Machine.”

He was referring to the passing of Brad Dye, Mississippi lieutenant governor from 1980 to 1992 after stints as state treasurer, other offices and in 1954, a driver for U.S. Sen. James O. Eastland during his re-election campaign.

Like his mentor, Eastland, whose long stretch of power included a statewide network of lieutenants, cronies, operatives and ward-heelers who could make or break an upcoming politician’s career, Dye came out of a different era—one with some striking contrasts to today’s politics.

As a much younger columnist who’d covered the state Legislature in the early 1980s, I once described Dye as “King Brad,” then the state’s most powerful politician who ruled from his perch in the state Senate, and decided whether missives from the House or even the Governor’s Mansion deserved attention.

I guess I’m getting old, but I look back at Dye’s reign with a hint of nostalgia these days. Cut from the Eastland mold, he was a conservative Democrat back when Republicans were what his mentor called a “zero” who offered voters “mighty dern little.” Still, Dye supported Gov. William Winter’s landmark education reform package in 1982, the highway expansion program of 1987 and decent funding for the state’s universities.

Dye lost power when Republicans began taking over the state’s reins in 1991—ironically the same year I called him “King Brad”—and that transition has proven Eastland’s words to be prophetic as well as true when he said them. Mississippi voters still get “mighty dern little” from Republicans, other than an occasion to rail against liberals, minorities and immigrants.

Sure, politicians often took their cues from Eastland in Washington, D.C., like Dye early in his career, but at least Eastland was a Mississippian with a constant eye on Mississippi; mind you, back then it was not a good thing if you were African American. Perhaps that’s why Eastland finally seemed to soften in his last years, befriending civil-rights leader Aaron Henry, accepting the reality of civil-rights gains and making his office more responsive to the concerns of black citizens in his state.

Today, the state’s Republican rulers take their cues from powerful ideological forces far beyond Mississippi with no non-political interest in the state or its people.

Gov. Phil Bryant, a charter member of the FOD (Friends of Donald) club, sends Mississippi National Guardsmen to the Texas-Mexico border in support of President Donald Trump’s immoral immigration policies. Bryant recently withdrew support for a $70 million three-state plan involving Louisiana, Mississippi and Alabama that would have restored Amtrak passenger rail service from New Orleans through the Mississippi Gulf Coast to Mobile, Ala. The states would have split the cost with the federal government.

These days the billionaire Wichita, Kan., and New York City-based Koch brothers, their Americans for Prosperity organization, and the archconservative American Legislative Exchange Council call the shots for Republican politicians across the country, including Mississippi. The Koch brothers, rich with oil holdings and major producers of gasoline, asphalt, tires and seatbelts, don’t like public transit, and they recently helped kill a much-needed $5.4 billion mass-transit plan in Nashville, Tenn. Trump wants to slash Amtrak funding, something the Koch brothers would applaud.

Joe Atkins is a veteran journalist, columnist, and professor of journalism at the University of Mississippi. His blog is laborsouth.blogspot.com and he can be reached at [email protected] This column does not necessarily reflect the opinions of the Jackson Free Press.