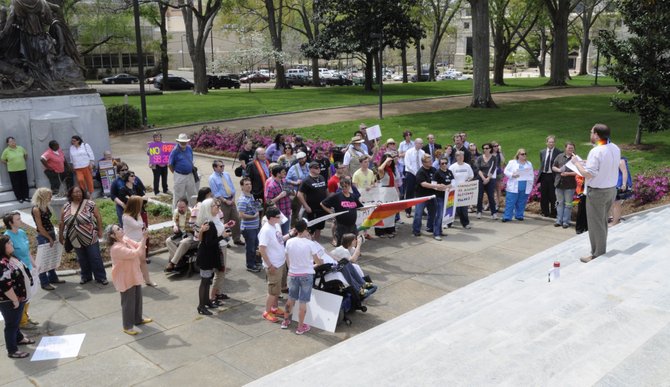 With the controversy over Senate Bill 2681, Jackson has served as the epicenter for much of the pushback against the measure, including an April 3 rally in Jackson against the bill, which civil-rights groups fear will lead to legalized discrimination. Photo by Trip Burns.

Chokwe Lumumba, the late mayor of Jackson, once described Jackson as a new justice frontier, one that acknowledges that the city's diversity is its strength.

That was the impetus for his push for an anti-racial-profiling ordinance in 2010 to counteract discussion among state lawmakers about doing a show-me-your-papers style immigration law. Until now, despite attempts to enact so-called "no sanctuary cities" laws aimed at the city of Jackson, such anti-immigrant proposals, have repeatedly failed at the Capitol even as other discrimination-opening measures have passed.

Most recently, it was SB 2681, a new religious-practices law that in practice forbids government entities from infringing on the religious beliefs of citizens. Critics of the measure said the law gives more cover to organizations wanting to discriminate against minorities with few legal options to fight back, such as LGBT people.

If Mississippi is the newest battlefield for LGBT rights, its cities are emerging as the fronts. Already, three of the state's college towns passed resolutions affirming the rights of LGBT citizens.

Could Jackson—the state's largest city and seat of government—be next? The Jackson Free Press asked several of the candidates who sought the mayor's seat whether they would support a resolution in the mold of those passed in Starkville, Hattiesburg and Oxford.

Ward 7 Councilwoman Margaret Barrett-Simon made the strongest statements of any of the major candidates in the field, calling for an ordinance that would provide protection. Currently, the city's non-discrimination clause applies gender, race, color, ancestry, religious creed, national origin, pregnancy, childbirth or related medical condition, age, marital status and disability.

"We are all equal members of this community, and every person—regardless of sexual orientation, race, ethnicity, or background—deserves to be treated with the same measure of dignity and respect," Barrett-Simon wrote on Facebook.

Tony Yarber, who represents Ward 6 on the council, said that he would support strengthening the city's equal-opportunity employment statement, but said a pro-LGBT resolution is not the answer to the problem. Although Yarber did not propose a clear alternative, he did he say, however, that he would ensure as mayor that the best people, no matter their sexual preference, were selected for jobs.

"Quite frankly, I think it's sad that they would have to have a resolution to get recognized as a group of people in a democratic society. So, I think the resolution is ceremonial, and it's nice, but it ain't the answer. The answer is, 'What can I do as a mayor to be sure ... if there's a lesbian who can lead the public works department, then come on.' Because we want the best and brightest people," Yarber said.

Ward 2 Councilman and City Council President Melvin Priester Jr. also stopped short of endorsing a pro-LGBT city resolution or ordinance in his interview with the JFP, saying he is opposed to discrimination of any kind. He also said that he has been working to create a human-rights commission modeled after ones that have been created in other Mississippi cities that will help give protection to "a variety of people."

Attorney Regina Quinn said in an interview with the JFP that an LGBT resolution for the City of Jackson would be "premature."

"I don't espouse with any organization before you see some evidence of discrimination. If there is discrimination, yes, we will weed that out first hand in seeing it, but it just seems that until you see that, it would be premature to do it," she said.

Chokwe Antar Lumumba said that although he has not spoken with any organized groups of the LGBT community, he is a supporter of human rights for all people and would be interested in seeing a proposal for a solution to anti-LGBT discrimination.

"I'm for human rights for human beings. So anything that supports human rights—that's what I'm in favor of," Lumumba, the late mayor's son, said.

He later posted on his website about LGBT rights: "We will not seize the moment to politicize something that—in our opinion—is a basic human right.

"What we will do, however, is establish a City Human Rights Commission which would review and monitor all city contracts and engagements to ensure that vendors, contractors, and businesses involved in city work do not discriminate on the basis of race, gender, age, sexual orientation, national origin, nationality or class. "

Former Mayor Harvey Johnson Jr. said that while he is not familiar with the specifics of the resolutions passed in other cities, he would be open to the possibility of any resolution that aids in nondiscriminatory practices.

"I believe and support nondiscriminatory practices," Johnson said, "and that includes the LGBT community."

The JFP did not ask state Sen. John Horhn his position on LGBT ordinance during his endorsement interview, but a firestorm of controversy ignited when Horhn was the only member of the Jackson Senate delegation to vote for SB 2681, a controversial bill that civil-liberties experts fear is tantamount to legal discrimination.

Horhn said on his Facebook page that he was absent from the Senate chamber when SB 2681 was called for a vote.

"I am not in favor of SB 2681 because I believe it is bad for business in Mississippi and not needed. We already enjoy religious freedom in Mississippi; we just need to practice more reconciliation with one another."