Is Jackson the State's Next LGBT Rights Frontier? 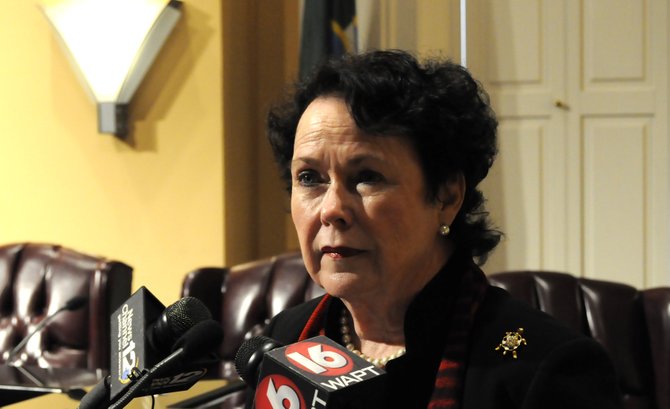 Ward 7 Councilwoman Margaret Barrett-Simon has made the strongest statements on LGBT rights of any of the major candidates in the field. Photo by Trip Burns.

In reaction to the passage of SB 2681, also known as the "Mississippi Religious Freedom Restoration Act," LGBT advocates marched to the Capitol at noon Thursday.

Speakers at the protest, many of them leaders of LGBT groups and several reverends, pleaded unsuccessfully with Gov. Phil Bryant to reject the bill due to its discriminatory nature.

With recent actions of Mississippi lawmakers and other statewide policymakers that could lead to wider discrimination against LGBT individuals, cities are leading the way for protection of LGBT rights.

Could Jackson—the state's largest city and seat of government—be next?

The Jackson Free Press asked several of the candidates who are now seeking the mayor's seat whether they would support a resolution in the mold of those passed in Starkville, Hattiesburg and Oxford—a timely question in the wake of SB 2681, the "Religious Freedom Restoration Act."

Ward 7 Councilwoman Margaret Barrett-Simon has made the strongest statements of any of the major candidates in the field, writing on her Facebook page Thursday after Gov. Phil Bryant signed SB2681 into law:

"It is a fundamental question not only of civil rights, but of basic human decency," Barrett-Simon stated. "We are all equal members of this community, and every person—regardless of sexual orientation, race, ethnicity, or background—deserves to be treated with the same measure of dignity and respect. Doing so, through official policy where necessary, will be an unyielding principle of my administration."

Barrett-Simon said while the details would need to be worked out, she would be interested in the creation of an ordinance that would provide protection.

Ward 2 Councilman and City Council President Melvin Priester Jr. stopped short of endorsing a pro-LGBT city resolution or ordinance in his interview with the JFP, saying he is opposed to discrimination of any kind. He also said that he has been working to create a human-rights commission modeled after ones that have been created in other Mississippi cities that will help give protection to "a variety of people."

Attorney Regina Quinn said in an interview with the JFP that an LGBT resolution for the City of Jackson would be "premature."

"I don't espouse with any organization before you see some evidence of discrimination. If there is discrimination, yes, we will weed that out first hand in seeing it, but it just seems that until you see that, it would be premature to do it," she said. "Now, what happened in Arizona (its "religious freedom law")—clearly objectionable, and it was just an absolute wrong thing to do. ... Creating laws in anticipation of some violation, just me as a lawyer and the way I've handled things throughout my life, I would say that when we see that then yes, it may be time to do something at that point."

Chokwe Antar Lumumba said that although he has not spoken with any organized groups of the LGBT community, he is a supporter of human rights for all people and would be interested in seeing a proposal for a solution.

"I'm for human rights for human beings. So anything that supports human rights—that's what I'm in favor of. That's actually a principle of the Malcolm X Grassroots Movement ... I have not (spoken with members of the LGBT community). I would have to see the proposal, but I would make the statement that no one is going to be discriminated against," Lumumba said.

Ward 6 Councilman Tony Yarber said that although he would not look for ways to suppress anyone, he doesn't believe an LGBT resolution is the answer to the problem. Although Yarber did not propose a clear alternative, he did he say, however, that he would ensure as mayor that the best people, no matter their sexual preference, were selected for jobs.

"As a pastor, I think the response that most people would respect is that I would say, 'No, we're not doing that,'" Yarber said. "As a pastor, quite frankly, my responsibility is to preach against sin and to absolutely denounce the degradation of human rights. There's no way in the world I would look at a way to suppress anyone. Quite frankly, I think it's sad that they would have to have a resolution to get recognized as a group of people in a democratic society. So, I think the resolution is ceremonial and it's nice, but it ain't the answer. The answer is, 'What can I do as a mayor to be sure ... if there's a lesbian who can lead the public works department, then come on.' Because we want the best and brightest people."

Former Mayor Harvey Johnson Jr. said that while he is not familiar with the specifics of the resolutions passed in other cities, he would be open to the possibility of any resolution that that aids in nondiscriminatory practices.

"I believe and support nondiscriminatory practices," Johnson said, "and that includes the LGBT community."

The JFP did not ask state Sen. John Horhn his position on LGBT ordinance during his endorsement interview, but a firestorm of controversy ignited when Horhn was the only member of the Jackson Senate delegation to vote for SB 2681, a controversial bill that civil-liberties experts fear is tantamount to legal discrimination.

Horhn said on his Facebook page that he was absent from the Senate chamber when SB 2681 was called for a vote.

"I was away from the Senate chamber during part of the debate on SB 2681, the Religious Freedom Restoration Act," Horhn wrote on Facebook. "Because there was no roll call vote on the issue, and I was out of the Chamber when the final vote was made, I am recorded as having voted in support of the bill. I am not in favor of SB 2681 because I believe it is bad for business in Mississippi and not needed. We already enjoy religious freedom in Mississippi; we just need to practice more reconciliation with one another. "

In the Senate, most votes are taken with use of the daily roll call. The chair asks if any senators want to vote no and the clerk records the rest of the senators as yes votes unless a voice vote is requested. There was no voice vote on SB 2681 nor did any senators request one. Horhn was the only member of the Jackson delegation voting in favor of the bill, which Gov. Phil Bryant signed Thursday. The other Jackson senators—Democratic Sens. Hill Frazier, Sollie Norwood and David Blount—voted against the bill.

In reaction to the passage of SB 2681, also known as the "Mississippi Religious Freedom Restoration Act," LGBT advocates marched to the Capitol at noon Thursday.

Speakers at the protest, many of them leaders of LGBT groups and several reverends, pleaded unsuccessfully with Gov. Phil Bryant to reject the bill due to its discriminatory nature. Many of the speakers from the LGBT community criticized the bill, saying that Christians have no need of any more protection from discrimination in Mississippi than they already have.

"Who is protecting us from the religious?" asked Constance Gordon, youth advocacy coordinator for ACLU of Mississippi. "Where is our protection? I can look around probably anywhere in Mississippi—turn 360 degrees—and see 360 churches. ... If you can go on every corner and see a church, I don't think that you (religious people) are being targeted."

Although Simmons was unable to attend, many speakers agreed with him and accused the bill's potential to encourage discrimination as a harkening back to Jim Crow legislation.

"SB 2681 is the living embodiment of everything the Old South represents," said Brandiilyne Dear, president of The Dandelion Project.

The Rev. Todd Allen, present on behalf of the local PFLAG (Parents, Families, & Friends of Lesbians and Gays) chapter, said on the Capitol steps that that preachers who support SB 2681 are only setting the LGBT community back.

"This legislation is very sneaky attack to try to put us back into the closet," Allen said.