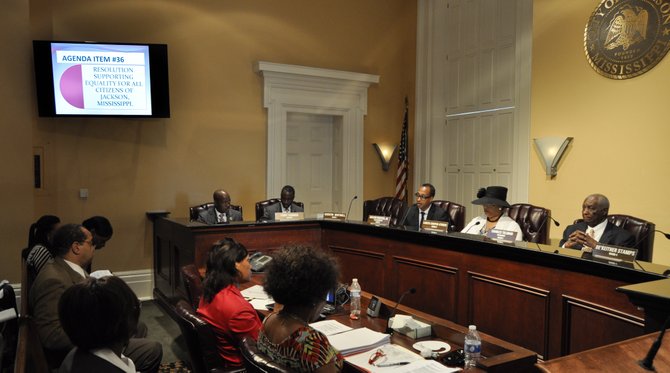 After more than two hours at today's Jackson City Council meeting, before a packed audience, members voted 3-1 for a "resolution supporting equality for all citizens of Jackson, Mississippi." Photo by Trip Burns.

Resolution Supporting Equality for All Citizens of Jackson, Miss. 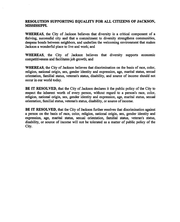 Mississippi's largest city and state capital finally passed a resolution affirming equality for all citizens, including the LGBT community.

After more than two hours at today's Jackson City Council meeting, before a packed audience, members voted 3-1 for a "resolution supporting equality for all citizens of Jackson, Mississippi." Ward 3 Councilwoman LaRita Cooper-Stokes was the lone dissenting vote, but did not speak against the measure. Ward 1 Councilman Quentin Whitwell and Ward 4 Councilman De'Keither Stamps were absent.

The sponsors of the resolution—the eighth in a series passed in cities around the state—were Ward 5 Councilman Charles Tillman, a council veteran who also acts as president, and Melvin Priester Jr., of Ward 2, one of the younger councilmen, who serves as vice president.

Tillman said he was "honored" to co-author the resolution because elected officials should ensure that they behave as "our brothers' keepers."

"I know there is more good in Jackson than bad. I want to make sure when the history books are written there was no question where the City of Jackson was," Priester added.

The issue came to the fore recently as a so-called "religious freedom" bill in the Legislature, SB 2681, created fervent backlash from civil-rights groups, as well as local businesses, who worry that the measure would open the door to discrimination against certain groups, including the LGBT community. In response, the Human Rights Campaign launched a statewide initiative to promote LGBT equality, and several cities around the state passed non-binding resolutions supporting LGBT rights.

Locally, these events took place against the backdrop of the Jackson mayor's race, in which three sitting council members sought the seat vacated with the death of human-rights activist and attorney Chokwe Lumumba.

One of the top questions asked at debates and forums during the recent special election for mayor was if the candidates would support an LGBT resolution for the city of Jackson. Priester, who ran for mayor, said during his campaign that he opposed discrimination of any kind. He also said he was working to create a human-rights commission that would help protect a variety of people.

Ward 7 Councilwoman Margaret Barrett-Simon stood out from the rest of the candidates with her strong opposition to SB 2681, which many fear will allow discrimination of LGBT Mississippians, and support of an LGBT protective ordinance.

"It is a fundamental question not only of civil rights, but of basic human decency," Barrett-Simon wrote on her Facebook page the Thursday after Gov. Phil Bryant signed SB 2681 into law while surrounded by prominent religious-right leaders, including Tony Perkins of the Family Research Council in Washington, D.C.

"We are all equal members of this community, and every person—regardless of sexual orientation, race, ethnicity, or background—deserves to be treated with the same measure of dignity and respect. Doing so, through official policy where necessary, will be an unyielding principle of my administration," Barrett-Simon promised then.

Mayor Tony Yarber said early on in his campaign that he did not believe a resolution was the solution to anti-LGBT discrimination; however, near the end of his campaign, he said that he supported human rights for all human beings, leading some to wonder if his opinion about a resolution could change.

"I don't have to agree with a lifestyle in order to be a defender or to defend that person who carries that lifestyle out," Yarber said. "... With the right leadership, that leader says we're going to protect everyone. And if we find that you have been discriminated against, we're going to deal with you as severely as we can because it isn't right."

Knol Aust, co-founder and chair of Unity Mississippi, released a statement during the meeting applauding the move. " I'm excited to see Mississippi's capital and largest city recognize that diversity, including LGBTQ citizens, is a critical component of a successful city," Aust said. "It's an historic and timely resolution—especially when you consider the recent legislation (SB2681) that was originally manufactured to allow discrimination against the LGBTQ community. We welcome this acknowledgement by the city that its citizens deserve equal treatment regardless of their sexual orientation or gender identity."

Unity Mississippi further emphasized that the resolution is only one step on a journey toward equality that must continue, though. "We applaud the Council's work in passing this resolution. This is a remarkable first step in the movement to establish full equality under the law for the people of Jackson. We, as a community and as an organization, strongly encourage the Council to continue this important work by now considering and passing into law an ordinance that codifies the sentiment declared in this resolution," said Jenni Smith, Unity vice chair and co-founder.

Mississippi NAACP President Derrick Johnson spoke at the beginning of the meeting in favor of the resolution. No one spoke against it.

Very proud of our city council!

Being gay is not a life style, like being a fireman or policeman. Being gay is a life. There is a huge difference between the two.

The fact remains that far-left liberals helped bring homosexuals front and center as a means of destroying the First Amendment that guarantees religious freedom. Progressives created a special class of people by putting homosexuality, which as a behavior has become the first "civil right" of its kind, on equal turf with race and ethnicity. This new "civil right" has been used to neuter the First Amendment so that homosexuals can sue Christians, or anyone who disagrees with their behavior, for not participating in their weddings, or for trying to restrict their behavior on the premises of Christian businesses. Because people have been so dumbed down by our system of education, and have become so vulnerable to the constant bombardment of homosexuality in the media, people have lost the ability to see the true intent of gay politics.

What is actually anti-First Amendment is the attempt by some to get the government to "establish" their religious beliefs as the law of the land. That is a clear violation and patently absurd -- not to mention, used as an excuse to discriminate. Folks have tried to use the First Amendment for years as a way to get the government to embrace their religious beliefs as law, and it's downright un-American.