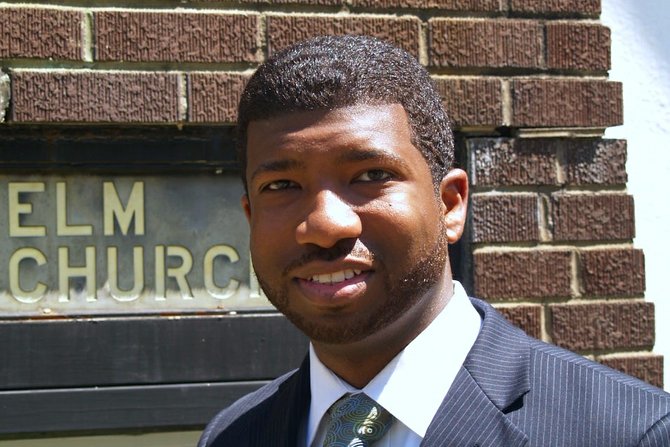 Ever since CJ Rhodes swept into Jackson just a few short years ago, he has been a big, important part of the community. Wherever people came together with purpose—whether to worship, discuss smart development, address the importance of education and the city's young people—Rhodes, his warm smile and quick mind were there, too.

In April 2010, Rhodes became the youngest pastor at the historic Mount Helm Baptist Church on Farish Street. Rhodes also quickly became an important voice in the Jackson Free Press, offering his well-reasoned opinions on the topics of the day.

This morning, Rhodes sent an email to his many friends, saying, "Not Goodbye, but See You Later!"

After a little more than three years of gratefully serving the good people of Mount Helm Baptist Church ... I will be leaving Jackson's oldest historically black congregation to answer the call to become Alcorn State University's rector of the historic Oakland Memorial Chapel, director of student religious life and assistant professor in the Department of Social Sciences.

It has been an awesome and humbling honor to serve Mount Helm and to be a pastor whose parish is Jackson. This Sunday (Sept. 8) will be my last time preaching as pastor of Mt Helm. I pray that God will continue to take them deeper, higher and wiser in the future. I remain committed to Jackson and its flourishing, and will continue to support its leadership and activists even as I make the Alcorn community a home away from home.

Thank you in advance for your prayers and well wishes. Please keep my family, Mt Helm and me lifted in your daily supplications.

To God be the glory!

Rhodes' boundless energy drew people together to make positive change. In October 2010, he and Pastor Stan Buckley of First Baptist Church of Jackson came together in conversation for a Jackson Free Press event on "Race, Religion & Society."

"I think Jackson, as a whole, is in the midst of a great renaissance," Rhodes said before the event. "As we are going about that, we need to ask ourselves how do we not leave behind the least of these? How do we address economic empowerment, educational empowerment for some our most abandoned communities and poor working class families? And, ultimately, it is my belief ... that the church should lead the role in that transformation."

This summer, Rhodes tied the knot with Allison Thomas, after proposing to her in front of his congregation. About 850 of their closest friends attended the couple's June wedding.

Rhodes, a native of Hazlehurst, attended the University of Mississippi and Duke Divinity School in North Carolina, where he earned his master's of divinity. After graduating, he worked as the administrative assistant to Dolphus Weary at Mission Mississippi, a Christian organization that works to bring people together.

All of us at the Jackson Free Press join the community in wishing CJ and Allison Rhodes all the best as they continue life's journey together.

I am proud to say that he was my pastor at Mt. Helm. His visionary servant leadership will sorely be missed.