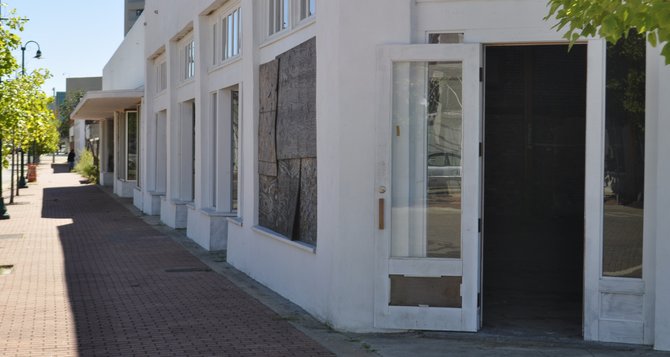 Embattled developer David Watkins is finally talking about the controversy that has swirled for weeks over the Farish Street redevelopment project in downtown Jackson. Photo by Trip Burns

Embattled developer David Watkins is finally talking about the controversy that has swirled for weeks over the Farish Street redevelopment project in downtown Jackson.

He answered his critics, which includes the seven-member Jackson Redevelopment Authority that terminated his long-held contract for the Farish Street Entertainment District redevelopment project, in statement to the Jackson Free Press this morning.

Watkins, who also redeveloped downtown's King Edward Hotel and Standard Life buildings, has received a flurry of criticism for making too little progress in the six years he held the contract on Farish.

"Some of these buildings could have been pushed to the ground with little effort and they are now structurally sound, many with new roofs, despite the need for tenant build out," Watkins said, defending his investments.

In the statement, Watkins said the work was completed "to exacting historical architectural standards," which at times has included purchasing bricks that cost more than $3 each from out-of-state vendors

JRA board President Ronnie Crudup has been silent since canceling the contract, declining to make officials available for interviews. When called this morning at New Horizon Church, where Crudup is bishop, a representative said Crudup would call the JFP for comment at 1 p.m. today.

In a letter to Crudup last week, Watkins expressed his displeasure with the board's Sept. 25 decision to terminate his contract on the Farish Street Entertainment District redevelopment project.

In the letter, Watkins said he had sunk approximately $4.7 million of his personal money into the project, and that his organization, the Farish Street Group, had already spent nearly $10 million on the infrastructure of Farish Street.

Pick up Wednesday's edition of the Jackson Free Press for more updates on the troubled project.

For more background, be sure to read some of the JFP's other stories on Farish street here and here.

“Some of these buildings could have been pushed to the ground with little effort and they are now structurally sound, many with new roofs, despite the need for tenant build out. Watkins Development re-worked the City’s water and sewage system below ground level, built additional drainage systems, repaired the brick-paved 300 yard street, repaired over 600 linear yards of brick sidewalk ranging from nine to fifteen feet wide, rebuilt and repaired interior walls, rebuilt and repaired concrete floors, reinforced support structures for upper floors, plumbed nearly every building, brought electric service to each building, purchased HVAC equipment, acquired contract rights for amazing artists like BB King and has advanced substantial administrative and personnel funds over the years. All of this has been done to exacting historical architectural standards, which sometimes required us to purchase bricks at over $3 each from out of state."

JRA board chairman Ronnie Crudup called back! Some of his comments will be in tomorrow's story. Be sure to check back to JFP.ms tomorrow!

Thanks for the update. I really hope that some sort of agreement can be made to resolve this situation. I know firing the developer is the first thought that comes to everyone's mind but it would take a long time to select another developer, get them to finalize a plan and to secure funding. There is no telling how long all of that would take.

I recognize that there hasn't been any physical work on Farish since sometime in late 2011/early 2012. The failure in this instance is with regard to funding. That is what is holding up the project. The various sources of money that Watkins was depending on to finish Phase I of the project all evaporated for various reasons (largely due to the state of the economy). I would hope that Watkins Development, JRA and the City of Jackson could huddle and work through every possible financing scenario/lending scenario to secure the funding necessary to get Phase I of the project finished. There has to be a way, whether it is a grant, bonds or other funds that can give the money that is needed to finish what would seem likely to be a very profitable entertainment & business district.

Let's wait and see who JRA awards the contract to next.....that should clear up a lot of questions. I don't have a dog in this show, but in spite of any delays, Mr Watkins does have a track record of getting things done in Jackson. More to come, no doubt.

Oh my! This is a very unpleasant situation for the developer. Where are his investors? I’ve never heard of a developer implementing a major redevelopment project without having a minimum of 80% funding from other private investors and/or financial institutions. Funding should have been secured first! Not that I have issues with local or state government, unlike Mr. Watkins, I would have stayed away from public funded projects.

Moral of the story: Never rely on public funds (tax credits, incentives, loans, bonds, & etc.) as your primary source of funding for any urban development project. Government will say one thing and do another.