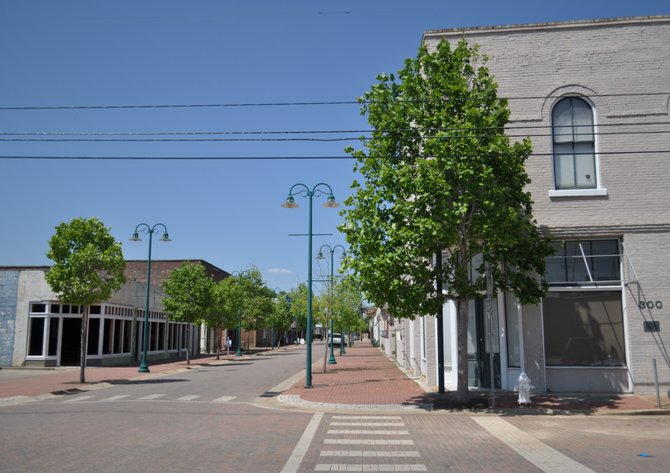 Since developer David Watkins responded to a flurry of criticism over his handling of the Farish Street renovation project with a letter yesterday afternoon, his camp has ratcheted up its war of words. Photo by Trip Burns

Since developer David Watkins responded to a flurry of criticism over his handling of the Farish Street renovation project with a letter yesterday afternoon, his camp has ratcheted up its war of words.

Late Wednesday afternoon, Watkins asked the Jackson Redevelopment Authority to reconsider its Sept. 25 vote to cancel the contract with Farish Street Group LLC, the company charged with renovating and developing the Farish Street Entertainment District since 2008.

Lance Stevens, Watkins' attorney and a managing partner in Farish Street Group LLC, disagrees with JRA's characterization that Watkins failed to "commence and/or complete construction or renovation of improvements" on time.

"Respectfully... we object to and protest the action taken by the Authority and request a reconsideration of that action," Stevens wrote. "Our companies have invested years of effort, expended a lifetime of good will and spent millions of dollars on the project over the last four years."

The controversy spilled over onto social media Thursday morning when Stevens responded to a local blogger who suggested that local taxpayers had plenty of skin of the game.

Stevens accused the blogger of being "quite unkind to Watkins" in the past. Stevens added: "To be clear, the JRA made a $10.5 million bond promise, which would have completed the project. ... They did not live up to that commitment, and Watkins was forced to find funding elsewhere. The JRA and the City DO NOT HAVE A DIME in this project, despite many mischaracterizations in the online media."

Neither JRA's designated spokesman, President Ronnie Crudup, nor David Watkins immediately returned phone calls for this story. Stevens emailed the Jackson Free Press and said that Watkins would not be conducting media interviews. Stevens added that he had little more to say beyond what he states in his 10-page letter.

In that letter, Stevens defended Watkins and the Farish Street Group's work, and listed financial concerns for all parties involved as the biggest reason JRA Board President Ronnie Crudup should reconsider the decision to cut ties with the development group.

Stevens wrote that "The loss of over $5 million in tax credits, and up to $4 million more in tourism tax rebates, (will) evaporate if Watkins Development is not a participant, at some level, in the Farish Street project."

He also offered a warning: "The inevitability of protracted litigation in federal court could delay or doom the project."

May I make a constructive suggestion? Just because Phase 1 of the plan has been scrapped or delayed does not necessarily mean we can not and should not proceed with Phase 2. Phase 1 was infrastructure development and establishment of anchor businesses and shops. Phase 2 is the establishment of a music recording facility. While Phase 1 has been undergoing until its delay, Sherman Lee Dillon has been quietly renovating the old Trumpet Records studio for just that purpose. We cannot let some categorical plan with unreasonable or unforseeable timelines stop Farish Street development. We must move ahead. I say proceed to Phase 2.

The problem with moving on to Phase II, which, from reading past reports is intended to "rehabilitate the properties on the secondblock north of Griffith with uses focused on the music industry including space for recording studios and broadcasting" is that Phase II also costs money. It sounds like Phase II isn't just the recording studio that Dillon wants around 50k to renovate but the entire 2nd block of Farish Street. That would be a sizeable chunk of money. If they don't have money to finish Phase I, then I don't see any way that they have money to begin and actually complete Phase II. Likewise, they would have to get tenants lined up for Phase II and I am thinking that Phase I is where most of the true clubs/bars/restaurants are, which is where the real draw would be. So, Phase I is likely what would be needed to truly draw people to Farish Street.