Opposite Day Comes Once a Year 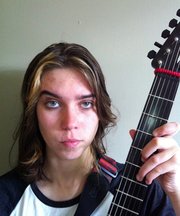 Local Jackson band, Opposite Day, both formed last year and performed at Chick Ball for the first time with guitarist and singer Griffin Jones, 15; bassist Beth Ann Jones, 13; and their dad, Spencer Jones, on drums.

Since then, Opposite Day has made a few changes.

• At this year's Chick Ball, Opposite Day will include bassist Spencer Jones and drummer Chris Goodwin of Los Buddies with Griffin returning as the guitarist and singer.

• The members' taste in music has matured from cartoon theme songs to fusion and hard rock.

• Eric Johnson's "Cliffs of Dover" has more than 800 notes in it, and Opposite Day intends to rock all of them while covering the song.

• Opposite Day's main goal is to inspire people to love music and play real instruments. The bandmates feel that there are too many artists who simply use auto tune and don't have a passion for music.