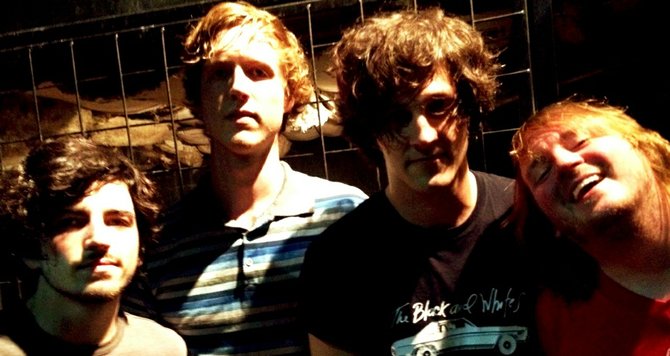 The Unwed Teenage Mothers remember what it's like to be broken-hearted. The Oxford-based group plays noisy garage rock with yearning pop songs tucked inside. Their recordings feature distorted drums and heavily treated vocals like many of their garage rock contemporaries, but the group's melodies and lyrics hearken back to classic '60s pop songs.

Singer and guitarist Colin Sneed started the band as a solo recording project in 2008. An Oxford native, Sneed grew up in musical opposition to the jam bands and "white boy blues" that prevailed in the local clubs. Starting out as a punk rocker in high school, he was later influenced by the garage and punk sounds of Oxford bands like The Preacher's Kids. He also admits to an affection for the Top 40 pop songs masterminded by legendary '60s music producer Phil Spector.

Wanting to get his own music down, Sneed began borrowing computers from friends in mid-2007 to record his songs. After sharing some of his initial tracks on Myspace, the guitarist began hearing from record labels from around the country, resulting in the steady release of his solo music. Sneed has three vinyl EPs to his credit--two alone and one with the Unwed Teenage Mothers, with another EP set for release this week.

"I just kind of stumbled into putting out records and it's pretty fun," Sneed admits.

The band is doing more recording as a group these days, too. The latest EP, "Forever Until You Are Bones," is from an older session that Sneed recorded by himself at his apartment, but the full band (which also includes Clinton natives Landon Boyle on guitar and Shane Prewitt on drums, as well as bassist Johnny Valiant, formerly of Amory) recently finished up an album-length project at Beau Bourgeois' (a member of Oxford's E-Meters) home studio. It's called "If You Think You Are Lonely Now."

"It's still home recording, but it's in a better home," Sneed says.

The band started playing live in 2010, but it has been a side project for Sneed up until recently. For the past few years he has spent a lot of time on the road as the drummer for Bass Drum of Death, an Oxford-based garage rock duo.

"Being on tour with Bass Drum of Death for nine months out of the year really made it hard to do anything else with another band," he says.

Since leaving that band last year, Sneed has pushed the Teenage Mothers with full force. The band recently bought the requisite old van, and they are planning tours to the Midwest and East Coast. While it's important for them to play in Chicago and New York, Sneed's favorite out-of-town shows have been in smaller cities. One of the most memorable was The Garden Center, a temporary venue in Starkville.

"I think it was somebody's parent's actual garden center. Last time we played there, there were over 350 kids at the show," Sneed says. "Those are always the most fun places to play, the cities where bands don't usually go."

The Unwed Teenage Mothers will play a record release party for their latest EP, "Forever Until You Are Bones," at Morningbell Records and Studios (622 Duling Ave., Suite 212, 769-233-7468) this Friday, March 29, at 7 p.m. The $5 cover includes food. Unwed Teenage Mothers' record is the latest release from Hiss Lab, a label run by Jackson music devotees David McCarty, Wes and K.C. Williams, and Chaney Nichols. It features cover artwork by McCarty and a hand-sewn cover created by K.C. Williams. Jackson stalwarts Los Buddies will open the show.

The March 29 show with Unwed Teenage Mothers and Los Buddies is also a celebration of Morrningbell Records and Studios' first birthday.