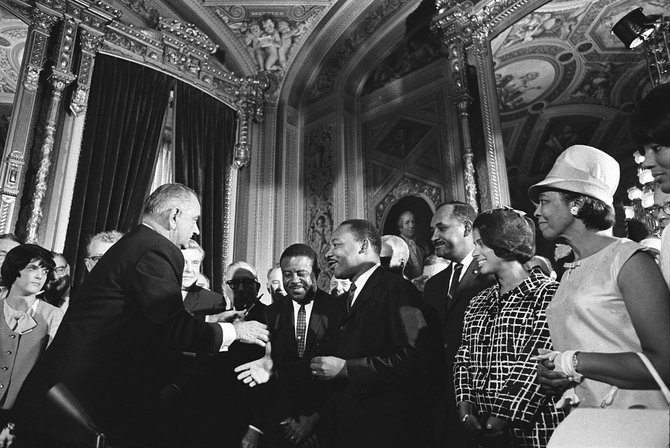 On the official state website, Secretary of State Delbert Hosemann proclaims the third Monday in January a state holiday in honor of Robert E. Lee and Dr. Martin Luther King Jr. The website, and the legislative proclamation, gives the two men equal weight without specifying why either is so honored.

The third Monday in January presents a conundrum for many folks in the Deep South, made even more complicated by the fact that today is also the day the first African American president is sworn in for a second term.

Today's commemoration in Mississippi is for two individuals who worked at opposite poles for black people in America: King dedicated his life to win equal rights and opportunities for African Americans; Lee led the Confederate Army of Northern Virginia in the Civil War, a fight where the South fought to continue the enslaved labor of blacks and the economic system slavery made possible.

At Hinds Community College, commemoration for both men has been rolled together into Heritage Day. Hinds CC isn't the only institution to use the Heritage Day label, Mississippi Public Radio reports. Others, including some Mississippi state lawmakers, aren't ready to give up commemorating Lee as a hero of the South.

Designating the holiday as Heritage Day may seem ambiguous and unthreatening; however, Dr. Ted Ownby, director of the Center for the Study of Southern Culture at the University of Mississippi, believes the term causes confusion and undermines King's contribution to society.

"I think it is important to name Martin Luther King or the civil rights struggle more broadly as what this holiday is noting," Ownby told MPB. Learning why the country chooses to honor King is an entry point to understanding the civil rights era, he said, though he said students should also learn about Lee.

State Sen. Hillman Frazier, D-Jackson, introduced legislation to make Martin Luther King Jr. Day an official state holiday in 1997, although President Ronald Reagan signed a bill making the third Monday in January a federal holiday in 1983. It was 2000 before all 50 states recognized the holiday. Mississippi may be one of the last states to combine King and Lee into commemorations on the same day. Virginia, Lee's home state, separated MLK Day from commemorations for Lee and "Stonewall" Jackson, another Confederate general, in 2000.

In an interview with the Margaret Walker Alexander Research Center at Jackson State University in 1998, Frazier recalled the atmosphere in Mississippi during the 1960s:

"One of the things that was quite shocking during the Movement was when they killed Dr. Martin Luther King. I was a student in school at the time and we received the news. And we were angry at the time. So we marched out. He was out in Memphis trying to uplift the rights of sanitation workers. We could identify with that because that's some of the things happening in the city of Jackson. Our sanitation workers were underpaid. They were driven around by white drivers who actually watched them do the work but were higher paid; so when Martin Luther King was assassinated with strikers at the time. And also during my college days at Jackson State University, I remember when students were slain on campus. I was a student at the time and when the police department came out on campus. That was actually during the height of the Vietnam War. The officials came on campus and they did shoot up and kill a couple of students. It was an eye-opening experience to many students."

A sniper gunned down Martin Luther King Jr. April 4, 1968, at the Lorraine Motel in Memphis, Tenn., after a lifetime in service to the cause of racial equality in America. He was 39 years old. His assassin, James Earl Ray, died in prison.

Lee died at home of pneumonia following a stroke at age 63. The U.S. Senate restored his citizenship—stripped after the Civil War—posthumously in 1975.