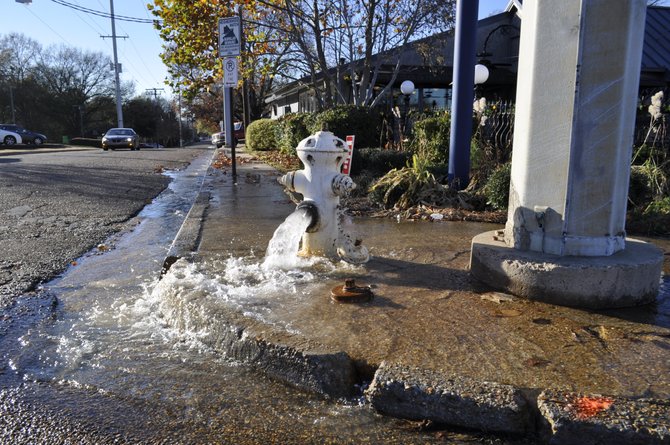 New high-tech water meters could save the city money and cut down on labor, but at what cost? Photo by Trip Burns.

Jackson Mayor Chokwe Lumumba has taken a city-first approach to infrastructure—he wants to pave city streets and fix the water and sewer network by hiring local contractors instead of handing work, and money, to businesses located outside the city limits.

Every decision he has made since he came into office, and some even before—from the water and sewer rate increases to expanding the city's public works department and changing his director—has been in that same vein.

When the city signed the $90 million contract with Siemens Industry Inc., a subsidiary of German infrastructure giant Siemens, to buy and install new water meters, it was essentially saying it needed outside help.

The contract was not Lumumba's idea, but as the city's mayor, he's now bound to support it. To be fair, he could not really stop its implementation. The preceding administration had already sold the bonds for the $90 million the city needed to pay the contract, and the city attorney said that doing anything else with the money could open the door for litigation.

Instead, the current administration tried to insert fail-safes to ensure the city got the most bang for its buck. When he was still serving as Ward 2 city councilman, Lumumba successfully lobbied the former administration to include clauses in the contract mandating certain percentages of minority participation and jobs for Jacksonians.

"I would have done a couple of things differently," he said in an interview last week. "There are two things I would have done, specifically, that would have made me feel comfortable putting it before the council. One, I would have made sure there was money set aside for the city to hire a monitor and make sure the minority and Jacksonian participation percentages were above board, and two, I would have addressed concerns about fluff in the contract, which is tough to measure without the manager... . If Siemens complied with that, and everything was OK, I would have put this before council."

Although Lumumba has tried to secure a contract with a company to monitor the implementation of the contract, a familiar problem has come up: funding. The contract doesn't include any money for a third-party monitor, and Lumumba says the going rate for such a service on a project of this size is $9 million—far more than the city can just pull out of the bank on a whim.

Still, the mayor said he wants to find the money, because the project is that important. "It may hurt us in some other parts of the budget, but it's something we need to do," he said.

In the meantime, Lumumba said the city is trying to monitor contracting to ensure at least 51 percent minority participation through the city's contract compliance department.

One of the selling points from Siemens when the contract went for its only stop before the current city council on July 22, 2013, was Chris McNeil, the former Mississippi State football star who served as senior account manager for Siemens in the Jackson deal.

McNeil stood at the podium in council chambers and personally guaranteed that Siemens would abide by the Equal Business Opportunity portion as it would any other section of the contract.

At that time, he said Siemens had already exceeded the 51 percent rate for minority contracts that the agreement requires.

"There's a checks and balances system in place to make sure the money stays here in Jackson," he said. "... I've gotten a chance to deal with a bunch of people inside the city. You hear stories about people who are out there trying to find jobs, or trying to pay rent. This contract breathes a little life into that. There are major firms getting some work, but there are a lot of small companies and individuals who are getting work out of this deal. It's a privilege to be on this project, and if you don't abide by the rules, then we'll find someone to replace you."

Before putting the final decision in the council's hands, McNeil offered one final pledge: "I've never been a person for fluff," McNeil said. "Mr. (Charles) Tillman, I give you guys my word. You've had my word for three years now, and I've followed through on everything I've promised to this point." Tillman is the president of the Jackson City Council.

McNeil left Siemens "about a month" after he gave that speech to go into private business with his new partner Dusty Rhoads, McNeil said Friday by telephone. Records on the secretary of state's website show that Rhoads, a Flowood alderman and the son of Flowood Mayor Gary Rhoads, had the company's name, McNeil Rhoads, incorporated on July 12, 2013—10 days before McNeil made his pledge to the council.

Although he's been contacted by his successor Earl Byrd for clarification on the contract since he left, McNeil said he and his partner's new business—selling and installing water meters—has no current business in Jackson and has not contracted with Siemens on the project he helped negotiate.

The deal will put a new water meter on every residence and commercial business in Jackson with the capability of being turned off and on by remote. Once installed, the city won't have to send out public-works employees to turn water off and on when service has to be connected, reconnected or disconnected.

The city has already paid more than $20 million to Siemens in relation to the contract since August.

This contract with Siemens is a joke. Ultimately the city was sold a bill of goods that the revenue from the meters would be "guaranteed" by Siemens in case there was a shortfall. The fine print of that guarantee falls back on the meter working correctly. The meters have a 20 year warranty so Jackson paid Siemens for a guarantee they already had in place. This is why Picayune turned away from doing one of these projects, why McComb is suing Siemens and why Cleveland is suing Siemens as well. And who was the guy in the middle of all that salesmanship? This cat Chris Mcneel and the Flowood mayor's boy. Now they are trying to recreate what they did with Siemens.

Replacing water meters for more accuracy and solid revenue is a good thing. Ridgeland and Clinton have done it and they are doing very well with increased revenue. Its when these big energy companies and their unlimited sales/marketing/lobbying budgets come in to play and they offer this "guarantee" kicks in that problems seem to follow. Same thing happened in Laurel.

Why is everything so difficult for Jackson? Here's how you monitor the participation. You contact the company and get the project manager's name. Introduce yourself. Ask for the local companies participating and the local people hired. Use city employees to verify quietly.

As to local, let me just say this about that. Not all the time is local always good. I understand the motivation behind buying locally or hiring a local company; however, sometimes a complex, high-level project requires skills or expertise not readily available in the local market.