A Piece of History: The Mississippi River Basin Model 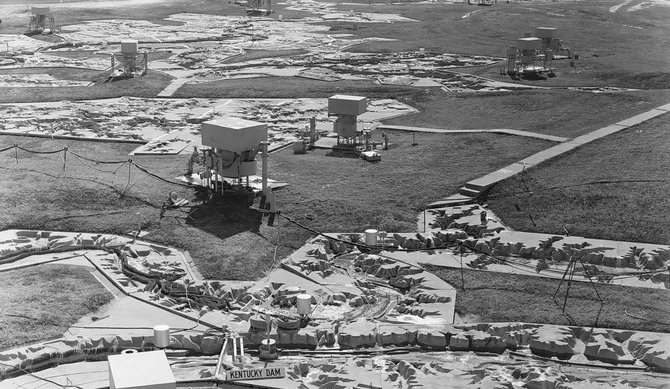 The Mississippi River Basin model has not been used since 1973, but visitors can still see it. Photo by Courtesy U.S. Army Corps of Engineers

"Are you sure you want to go in there?" I said as I looked over the poison ivy, so green and inviting. I thought back to the last time my friend Barb had gotten involved with poison ivy, and her skin oozed and itched for months, it seemed.

"It's the only way in," she said. It actually has another forest entry, but I didn't know that at the time as I gingerly followed her into the woods trying to walk on air with all my 250 pounds.

We were spending the morning with Steve Solomon, the Washington, D.C., author of "Water: The Epic Struggle for Wealth, Power, and Civilization" as he prepared for his next book on the Mississippi River, and it had been Barb's idea to show him one of the more amazing places you can see in the Jackson area. I readily agreed that it was an important artifact to see for anyone interested in the Mississippi River and the struggle to manage that behemoth. I had no idea, however, how overgrown it had become.

In the 1930s after the Great Mississippi Flood of 1927, flood control on the Mississippi River became a national imperative. Before computers (imagine that) were prevalent, people built physical models of rivers, harbors, and estuaries in order to simulate the flow of water, to examine different scenarios, and experiment with solutions. The U.S. Army Corps of Engineers built many of them—including this one—but none to this scale.

Members of Rommel's famed Afrika Korps from the nearby prisoner-of-war camp began construction on the Mississippi River model in 1943, and it wasn't completed until 1966, although there were portions that could be used before then. They built it using square 10-foot concrete panels with the topography etched into the concrete. The last use of the model was during the 1973 flood to test the effects of opening the Morganza Spillway.

As we stepped out of the trees and onto the concrete of the model, the sun was blindingly bright and the air oppressively humid as only a summer day in Mississippi can be. The model stretched out to the left and right of us with tributaries coming out of the trees across from where we stood with pipes, bridges, towers and pumps askew everywhere. Barb had an old aerial photograph that was labeled, and she was turning it in her hands as she turned in circles trying to orient herself. I wandered off crossing streams, rivers and mountain ranges feeling somewhat like Gulliver walking through Lilliput. And so it went. We never did manage to find the beginning or the end.

The model is deteriorating badly now and is so overgrown that it is becoming difficult to see. It is still, however, a reminder of the skill of our engineers and a unique piece of Jackson history.

The Mississippi River Basin model is in Butts Park and is open to the public. To get to the park, take the Springridge Road exit on Interstate 20 and turn left at McRaven Road.