Bringing the River Back to Life 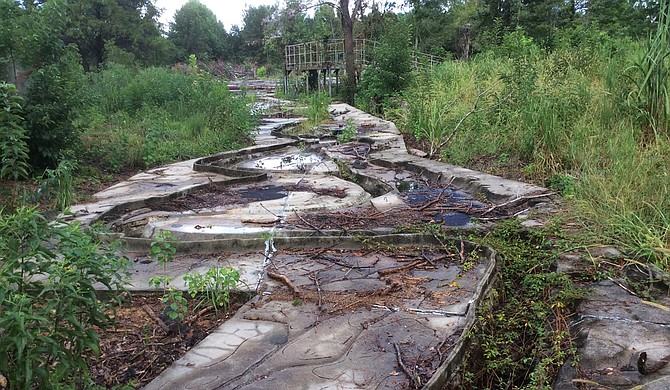 The 200-acre Mississippi River Basin Model covers the entire 15,000 miles of the river and documents 41 percent of the United States. It is the largest small-scale model in the world. Photo courtesy Richard Coupe Photo by Richard Coupe

The pencil tore through my sweat-soaked notebook page as I tried to keep up with Sarah McEwen, a local engineer and the president of the Friends of the Mississippi River Basin Model, as she glided across the surface of the model, ticking off the three goals of the Friends: to preserve, restore and enhance the model, and to do local outreach for it.

The model, a National Civil Engineering Landmark, is in bad shape; however, compared to the last time I wrote about it for the Jackson Free Press, it has improved, thanks to the Friends organization. Back then, Chinese tallow trees and poison ivy completely hid it from view, and it was so buried in old vegetation that it was impossible to find yourself on the model.

This time, McEwen led me straight to Baton Rouge, and we walked upstream like Gulliver in Lilliput. We strode over easily recognizable features of the lower Mississippi River such as the gates to the Morganza floodway, the old river-control structure, Natchez. Lake Bruin, Vicksburg, the Yazoo River Basin and the Steele Bayou control structure that prevents back-water flooding from the Mississippi River. This is where the U.S. Army Corps of Engineers planned to install some of the world's largest pumps to move water from the Yazoo Basin over the levee into the Mississippi—that is until the Environmental Protection Agency said no to the pumps because of concerns over adverse impact to wetlands in the area. We got as far as Memphis, where we could see marks from when the model was adjusted to account for rerouting the Wolf River .

After the devastating flood in 1927, and others in the 1930s, the Corps desperately sought a way to understand the Mississippi River. Major Eugene Reybold had the idea of building a large-scale model of the Mississippi River so engineers and researchers could observe the effects of weather and proposed control measures over time. In 1943, the Corps approved his idea.

Construction began soon afterward, with 3,000 German and Italian prisoners of war from a nearby internment camp doing much of the initial grunt work as they waited out the end of World War II. The model covers some 200 acres and took two decades to build, though the Corps could use parts of it through construction.

After they completed the model in 1966, the Corps used it to run tests to look at issues such as reservoir effectiveness and flood protection. However, with the high cost of operation and the rise of computer modeling, they began to use the model less and less over the years. The last test was in 1973, when the Corps tested opening the Morganza Spillway in Louisiana. In 1993, the City of Jackson took control of the model. After the Mississippi Department of Archives and History designated it as a state landmark, the City built Buddy Butts Park around it. However, the cost to operate the model as a tourist attraction grew too high, and it became overgrown.

Alabama native McEwen was born in 1991, well after most of the POWs would have died of old age. She graduated from Mississippi State University in 2013 with a bachelor's degree in civil engineering. She currently works at local engineering company Aecom. She says that the idea came for restoring the MRBM while she was working for Waggoner Engineering in Jackson.

"They encouraged us to find ways to become connected to the community, and someone suggested we visit the MRBM," McEwen says.

After learning about the model, seeing it and realizing its potential, McEwen and others, including a group from the local chapter of the American Society of Civil Engineers, formed an nonprofit in summer 2016 to begin the long process of making the model into something useful.

So far, the Friends have created an integrated mapping extension for Google maps that locates you on the model. They have also held two major events: a tour and restoration event April 2017 and a "movie in the model" event May 2018.

They regularly hold monthly clean-up days, and Friends speak on the model at professional and historical societies.

McEwen sees the model as a teaching tool for future STEM students.

"This, to me, is a way that kids in the future can get immediate access to engineering concepts and principles," McEwen says.   "I just want to provide something for the kids, specifically of Jackson, that will help them and be an advantage, and just expose them to some things that they might not otherwise know about."

Some City of Jackson officials also see the potential.

"This is the only one of its kind in the world, and in Jackson we need to be displaying the things that we have that can bring educational opportunities, which can bring tourism, right here where you can learn by walking from all the way from Louisiana to Mississippi," Ward 4 Councilman De'Keither Stamps said.

Ison B. Harris Jr., the director of parks and recreation for the City of Jackson, calls the model "a hidden gem," and has been providing support for the Friends and has been involved in the planning from the beginning.

"I think that this is a wonderful idea to bring education and history to life," Harris said.

"Every bit of the model is hand sculpted, some individual (touching) every square inch of the model," Wayne O'Neil, a former project engineer for the Corps, said. "I'd love to see it come back to at least where people could understand what happened."

For more information, to volunteer or donate, see friendsofmrbm.org.