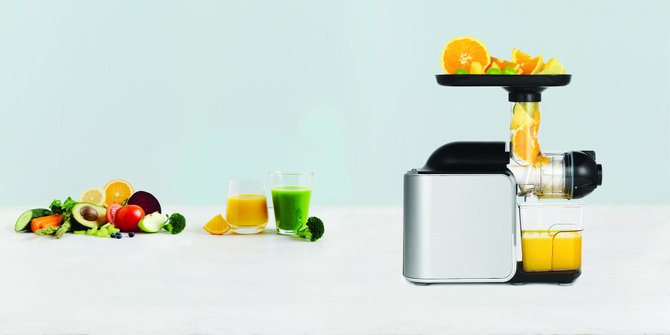 Making your own juice is quickly moving from trendy juice bars into home kitchens. Photo by Courtesy Flickr/Stiftelsen Elektronikkbransjen

I know a lot of juiceheads. All over my social circles, people are talking about getting fit by juicing ... thankfully, not the kind of juicing that gives you unwanted body hair and Hulk-like neck muscles, though. Juicing your own fruits and vegetables is the latest trend, and I want in.

So what is juicing, and how is it different from making a smoothie? Smoothies blend every part of the fruit or vegetable (or other item) together into a thick concoction. Juicing, on the other hand, extracts only the watery but nutrient-filled juice from the raw materials you put in, leaving behind a husk of sorts--all the dry parts, including the pulp and the peels. The two processes require different machines, a blender of some kind for smoothies and a juicer for, you guessed it, juice.

The health benefits of juicing are fairly obvious: fruits and vegetables are good for you. But I have been amazed to hear some of the benefits my friends describe: more radiant skin, cleared-up ear infections, overcoming a life prone to respiratory infections--even a miracle hangover cure.

Local realtor Allison Allen has been juicing on and off for about two and a half years with her husband, Scott. They got into the trend after watching the documentary "Fat, Sick and Nearly Dead," by Joe Cross.

"We were on board when we heard we could lose weight, and then all the health benefits that go along with it--because you're getting your nutrients by juicing that you couldn't get by eating," 32-year-old Allen says. "You couldn't eat that much food in one day to get the same amount of nutrients and minerals."

Many people use a juice diet as a way to detox, to kick off cleaner eating habits by going on a juice cleanse or fast--essentially consuming nothing or little besides juice for a set period. "We were real crazy about it for a few months--we actually did a fast in the beginning for like three days, which was very difficult, because it's a very mental thing," Allen says. "You're so used to putting food in your mouth and when you're not doing it, its very strange. And its not for everybody, but it was good to do to have a cleanse and do it for a few days."

These days, the Allens implement juicing into their breakfast routine nearly every day, along with solid food such as fruit or an omelet. "Sometimes, if we are running late or if we don't have the produce because we haven't been to the grocery store, we might skip a day or two, but we do try to do it every morning," Allen says. "And we basically just do it for health. If we go three days or so without doing it, we can feel it, physically."

Allen says the health benefits they experience include more energy, skin improvement, internal regularity and a noticeable difference in her husband's psoriasis.

Although people tend to reach for as many fruits as possible for smoothies, Allen says vegetables are the way to go for juicing.

"One thing that I've read is that you don't want to do too much fruit because your caloric intake can go up without you realizing it," Allen says.

"So we try to keep it all vegetable and throw in one fruit with it, (such as) green apple, pineapple or lemon to offset the taste. We do kale, it's one of our favorites. Its probably the highest as far as your micronutrients go, that's where you're going to get them, in kale. So we do kale a lot, we do spinach, cucumbers and celery for anti-inflammatory. We do beets a lot, which are a really good detoxifier of the liver."

Allen's favorite juice is what she calls "the mean green," which includes kale, spinach, celery and cucumbers. Sometimes she will add ginger, carrots or lime, plus a fruit such as green apple or pineapple to sweeten it up. "We don't get too creative with it, we just stick to the ones that we know are going to be beneficial to us."

Some tips (and tricks):

Interestingly, you can juice pretty much any fruits except banana, mango and papaya-- they tend to work as smoothie ingredients only.

You can use the leftover dry pulp in a variety of way, such as mixing veggie pulp into lean cuisines, tuna or egg whites. Plenty of other recipes can be found on the Internet.

Red, orange, and yellow bell peppers are a little spicy but delicious. Green bell peppers, not so much.

Beet juice looks like human blood and is very good for pranks.

Beets, carrots, apples.  You can play with the proportions, but a good guide is 1.5 beets, 4 carrots, 1.5 red gala apples.