Climate Change: Real or Not? 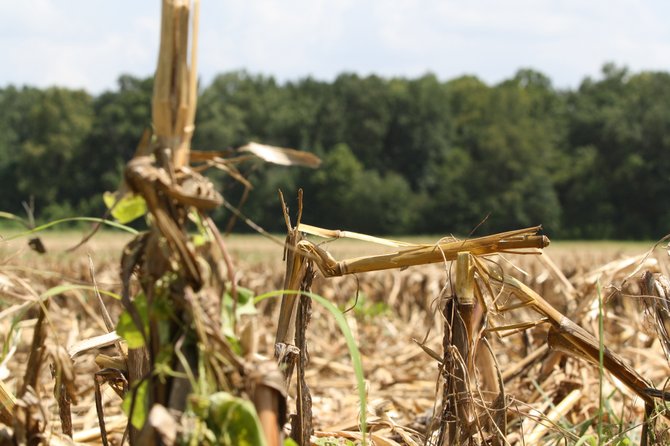 Mississippi farmers had little to complain about come corn-harvesting season this year. Fields like this one produced well, unlike those that suffered through the widespread drought in the midwestern United States. Photo by Jacob Fuller.

In 2008—back when President Barack Obama was a candidate—then-Sen. Obama promised to take on global warming. After a bruising, losing fight in Congress of proposed cap-and-trade legislation that would have forced greenhouse gas emitters to pay for their polluting ways, Obama seemed to put the issue on the back burner.

The subject's stove-top position shifted again when presidential hopeful Mitt Romney revived it during his acceptance speech at the Republican National Convention. "President Obama promised to begin to slow the rise of the oceans and heal the planet," Romney said, prompting ripples of laughter among the delegates. "My promise is to help you and your family."

Obama wasn't shy when he responded to the jibe just a few days later during his own acceptance speech.

"Yes, my plan will continue to reduce the carbon pollution that is heating our planet, because climate change is not a hoax," the president said emphatically. "More droughts and floods and wildfires are not a joke. They're a threat to our children's future. And in this election, you can do something about it."

The party platforms back up the candidates: "We know that global climate change is one of the biggest threats of this generation—an economic, environmental and national security catastrophe in the making," the Democratic platform states.

Republicans, however, aren't on board: "Science allows us to weigh the costs and benefits of a policy so that we can prudently deal with our resources," the platform states. "This is especially important when the causes and long-range effects of a phenomenon are uncertain."

Not surprisingly, American politicians disagree on an issue.

In the long run, it is the opinion of scientists, not politicians, that is important. The overwhelming majority of the world's scientific community clearly sees anthropogenic (caused by humans) climate change as a serious ecological problem. The only question is: How much? The agreement of the scientific community dates back at least decade and continues to gain strength.

Writing in the journal Science in December 2004, Naomi Oreskes wrote: "Policy-makers and the media, particularly in the United States, frequently assert that climate science is highly uncertain. ... This is not the case."

"IPCC's purpose is to evaluate the state of climate science as a basis for informed policy action, primarily on the basis of peer-reviewed and published scientific literature," she writes. "IPCC states unequivocally that the consensus of scientific opinion is that Earth's climate is being affected by human activities: 'Human activities ... are modifying the concentration of atmospheric constituents ... that absorb or scatter radiant energy. ... [M]ost of the observed warming over the last 50 years is likely to have been due to the increase in greenhouse gas concentrations.'"

Oreskes reviewed 928 scientific papers published in "refereed scientific journals between 1993 and 2003" to find dissenting opinions. "Remarkably, none of the papers disagreed with the consensus opinion," she wrote.

"This analysis shows that scientists publishing in the peer-reviewed literature agree with IPCC, the National Academy of Sciences, and the public statements of their professional societies. Politicians, economists, journalists, and others may have the impression of confusion, disagreement, or discord among climate scientists, but that impression is incorrect."

In 2005, National Science Academies (including the United States) from 11 countries, signed the "Joint science academies' statement: Global response to climate change." The scientists left no doubt as to their conclusions.

"[T]here is now strong evidence that significant global warming is occurring," they wrote. "The evidence comes from direct measurements of rising surface air temperatures and subsurface ocean temperatures and from phenomena such as increases in average global sea levels, retreating glaciers, and changes to many physical and biological systems. It is likely that most of the warming in recent decades can be attributed to human activities. This warming has already led to changes in the Earth's climate."

The bottom line is that the scientists all agree that climate change is real and that it is caused by human activities. One need not look farther than the harsh and violent weather patterns of the past year to see the devastation such changes can bring to the planet. More than 60 percent of the contiguous United States is suffering from drought, reports New Scientist magazine, along with parts of India and Eastern Europe. "In the Arctic, sea ice cover is at a record low, and the Greenland ice sheet shows what the U.S. National Snow and Ice Data Center calls 'extraordinary high melting,'" the authors write. "Global land temperatures for May and June were the hottest since records began in the 19th century."

In the story, "With El Nino On the Way, Next Year Will Break Heat Records," republished in Slate magazine, authors explain why variables in temperature are not evidence that anthropogenic climate change is not occurring. The authors conclude: "The signal of global warming caused by humans is very clear, despite attempts by certain parties to drown it out with a lot of noise."

StrongScience says we are at the brink of no return from unstoppable warming yet they still will not say it “WILL” happen. Find us one single IPCC warning of "crisis" that isn't surrounded by "maybes" as in "possibly" and "potentially" etc. NEVER have they said it will happen, only might happen. Help my planet is on fire..........................maybe? Nobody has suggested scientific exaggeration of worst case scenario research was illegal. Get up to date: Occupywallstreet does not even mention CO2 in its list of demands because of the bank-funded carbon trading stock markets run by corporations. Obama has not mentioned the crisis in the last two State of the Unions addresses. Julian Assange is of course a climate change denier. Socialist Canada killed Y2Kyoto with a newly elected climate change denying prime minister and nobody cared, especially the millions of scientists warning us of unstoppable warming (death). Our continued fear mongering of the voter with a climate “crisis” all but guarantees a President Romney.

It's hard to follow your argument, mememine69, but some of what you write is not accurate. The IPCC tends to put things in probabilistic terms, but they go beyond saying "maybe" or "possibly." That is, some things are simply stated as fact, and others are stated as high probability. Scientists do not speak of "unstoppable" warming that will cause "(death)." Rather, they speak of tipping points, past which large and irreversible changes will occur, such as the loss of Arctic sea ice. Also, it's not so much that the planet will warm enough to kill people directly, if that's what you meant to suggest, though heat waves will certainly kill some people. Rather, it's that accelerating warming will cause ecological collapse. There are already many signs of such collapse in the oceans, with mass die-offs of corals and reduced productivity of plankton.

As for your last line, I'm not sure what you mean, but it isn't "fear mongering" to take global warming seriously. Climate change is a "crisis" on the timescale of the next century. The longer we wait to address the problem, the harder it will be to stabilize climate. As for guaranteeing a Romney presidency, I am beginning to think nothing can do that.

I hope you didn't write the headline, Ronni, because "Climate Change - Real or Not" is about as condescending as it gets. It's as stupid as saying "Weather Change - Real or Not". You shouldn't let that kind of stuff get by you. Even if you haven't met us, the intelligence of your readers deserves a lot better than that. Find the headline writer guy and chew him out for us! OK?

Gerald, I'm not sure who wrote the headline, but I almost changed it on the page. The reason I didn't, though, is that the headline was clearly designed to appeal to people who don't already know or understand that climate change is a very real problem; that's the reason we did the story. Thus, I decided to leave it as I found it effective for that reason.

NSIDC just called the yearly minimum, and it's horrible news. http://nsidc.org/arcticseaicenews/">Arctic sea ice is now 49 percent smaller in extent than it's long-term average. This year's record low is 18 percent smaller than the last all-time record, which was set in 2007. It 's more than 1 million square kilometers smaller. We may have ice-free summers as soon as 2020.

That's terrible. Thanks for the update, Brian. As much as we miss you here, your job as a science editor suits you.

Thanks, Donna. I miss all of you too.