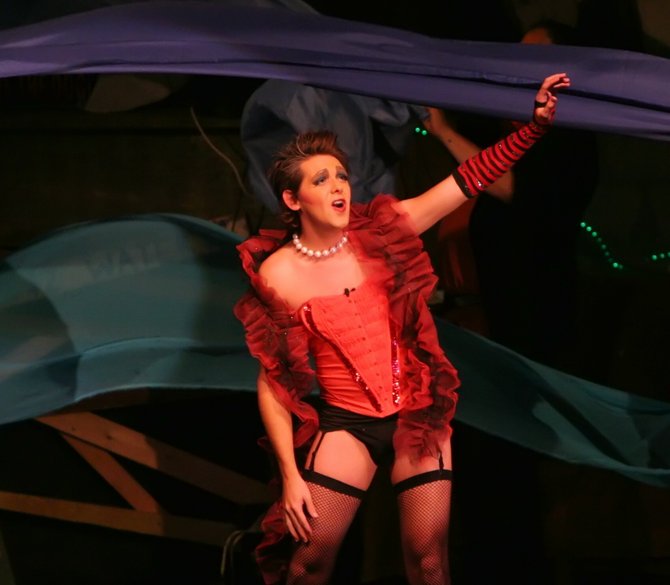 For fans of the cult classic "The Rocky Horror Picture Show," tightly fitted corsets, fishnet stockings and sky-high heels are forever synonymous with Dr. Frank-N-Furter. The character first wore the iconic getup in the 1975 movie release, and has been inspiring people to do the Time Warp in movie theaters, living rooms and on stages ever since. This Halloween, the Fondren Theatre Group brings the cult classic back to a Jackson stage for its fourth production. Chad King, reprising his role as the doctor, will don the corset and heavy makeup to once again become Frank-N-Furter.

King, 31, has lived in Flowood since he was 10 years old. He has enjoyed performing and singing since his middle school years. "What drew me to Rocky Horror was the singing," King says. At the time of his first audition, King had never seen the movie or play. "When I got the part, I immediately watched the movie to see more or less what I would be wearing--or not wearing."

"The movie is a cult classic, obviously. I fell in love with the movie but I adore the stage play," King says. Now a fourth-year veteran of the show, King says his favorite part is the audience. "Seeing the dedication of the fans, it's amazing to have people start asking you in April if you're going to perform the show," King says.

"The Rocky Horror Show" (the play version drops "Picture" from the title) is known for its audience involvement, but the Fondren Theatre Group asks that no one throw objects on stage. Costumes, however, are always welcome.

In preparation for the role (and the corseted bodice it requires), King says his first sacrifice is stop eating fast food. "I continue to be nervous, even though this is the fourth time I've done it." King says. "There are certain things you cannot mess up, out of respect for it being such a cult classic you want to stay true to  certain parts."

Still, the cast takes creative liberties in its performance. King's Frank-N-Furter is clearly from the South, as he has a southern accent through out the play. "It keeps the play grounded and makes it very relative to where you are," he says. King also tries to add something of his own to the character each year such as moving up in heel size. In his last performance as Frank, King wore seven and a half-inch heels.

When not performing in towering heels, King works at Chinn and Associates as a paralegal. He is also a student at the Mississippi College School of Law.

For show times, price and other details on "The Rocky Horror Show" at Hal & Mal's, visit jfpevents.ms.