The Delusion and Paranoia of 'Obama's America 2016' 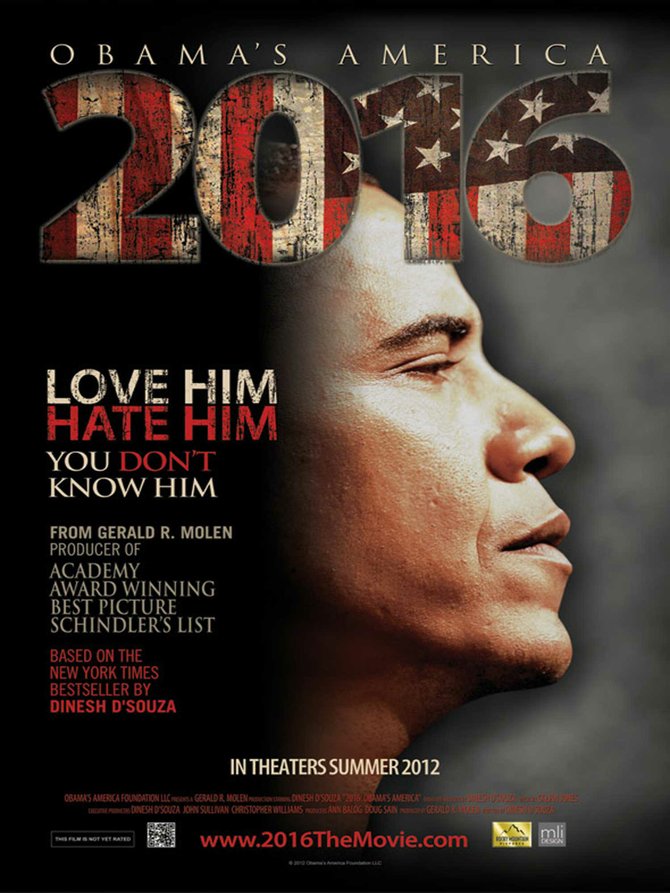 Conservatives have been abuzz this year about "2016: Obama's America," a documentary by Dinesh D'Souza, claiming to expose the "real" Barack Obama.

So who is Obama really?

According to D'Souza, he is a communist revolutionary consumed by the anticolonial passions of his Kenyan father. D'Souza presents his film as a stark warning. If voters make the wrong choice in November, the United States as we know it will disappear by 2016, replaced by a third-world dictatorship.

As you may have guessed already, D'Souza's film is one of the kookiest, most dishonest documentaries ever made. There are distortions and outright falsehoods in almost every minute.

The central premise of the film is that Obama is secretly a communist who was shaped by Kenyan resistance to British rule. This is a disturbing claim that demands strong evidence, but the movie does not present any real evidence at all. The entire argument hangs on guilt by association and quotes taken out of context.

Ultimately, D'Souza offers viewers little more than a quote from the end of Obama's autobiography, "Dreams From My Father." Weeping at his father's grave, Obama makes peace with his father and forgives him for his flaws, which he recognizes in himself.

It is a deeply personal passage about family and identity.

For D'Souza, this passage signals that Obama shares every one of his father's beliefs, including an allegedly rabid anticolonialism. He is not discouraged by the fact that Obama met his father only once, when he was 10. It does not matter to him that Obama shared none of his father's experiences and first visited Kenya when he was nearly 30. It's a bit like someone ascribing to you all the beliefs of a crazy aunt you met at only one family reunion. But that's all D'Souza thinks he needs to run off to fantasyland.

Almost no one D'Souza interviews has met Obama, and none of those few knows him well. D'Souza interviews friends of Obama's father in Kenya, but why would Obama share the views of people he doesn't even know? D'Souza applies the radical beliefs of nearly anyone loosely associated with the president. If any of Obama's college professors believes a thing, Obama must believe it, too. If Obama ever read a book, he must agree with it completely. And if a family friend Obama knew as a teenager became a communist in the 1940s, that means Obama must be a communist, too. Guilty by association.

Many parts of the film are laughable. D'Souza sees dark signs in every corner, including even office decor. He makes a great deal of Obama returning a bust of Winston Churchill to the British, for this supposedly signals rage at British colonialism--although a nearly identical bust of Churchill remains in the White House. The other bust was only a loan, and the British always expected its return. In its place, the Oval Office now displays a bust of Abraham Lincoln. Obama clearly takes inspiration from Lincoln, who steered the country through troubled times. (Not to mention, Lincoln was actually an American.) If D'Souza is willing to misinform his audience about something so trivial, why would we trust him on anything else?

The movie grows ever more unhinged as D'Souza claims that a second term for Obama will destroy the country. He warns that Obama has deliberately weakened America by reducing our nuclear stockpile to 1,500 warheads in the New START Treaty. Apparently, treaty supporters like Henry Kissinger and James Baker are also anticolonial communists if that is the standard. The film then claims that Obama plans to unilaterally dismantle the rest of our nuclear weapons, without reductions from any other country. D'Souza's only evidence is that Obama hopes the world will one day be free of nuclear weapons. But Ronald Reagan said precisely the same thing. Neither Reagan nor Obama ever said that America should disarm unilaterally.

D'Souza also claims that Obama has deliberately built up deficits to impoverish the U.S., so it will become a third-world country. He never confesses that the deficit stood at $1.2 trillion the day Obama took office. Even if Obama does not win re-election, deficits will fall by at least $200 billion under his administration, or about 25 percent as a percentage of GDP. By contrast, George W. Bush took us from a surplus in 2001 to a deficit of $1.2 trillion in his last year. The film tries to hide these facts by talking about the increase in deficits since 2000, conveniently blaming Obama for deficits that grew under Bush. Do Bush's deficits mean that he was secretly a communist intent on destroying America because of a troubled relationship with his father?

It would be easy to go on about all the things this movie gets wrong, all the truth it buries, all the hilarious claims it makes. But you get the point. The truth is that there is no "real" Obama, no secret communist freedom fighter hiding within the completely ordinary Democrat on the surface. Conservatives are entirely free to dislike Obama and vote for Romney. But they should stick to the facts and criticize the policies Obama has actually enacted or proposed.

Those who follow D'Souza off into the woods of paranoia and delusion do a disservice both to the country and to themselves. They harm the country by debasing our political discourse, which has been filled for years now with wild-eyed madness about birth certificates and FEMA camps. Frankly, they should be embarrassed by such kooky hogwash. But the conservative movement has become an echo chamber, where lies are held up as truth the liberal media tries to hide.

Fortunately, most Americans are repulsed by extremist conspiracy theories, and they will never embrace an opposition that looks deranged.

If Republicans hope to win national elections, they need to clean house, because folks like D'Souza do not deserve a place at the table. They belong out in the back yard, howling at the moon.