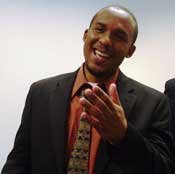 President Barack Obama is not a Muslim. He isn't secretly trying to replace capitalism in America with socialism. This means he isn't a communist. He didn't inherit an anti-imperialist, anti-colonial gene from his father that causes him to hate small businesses. He doesn't look like Hitler. He doesn't have a deep-seated hatred of white people that is going to result in his banning the possession of firearms. He wasn't born in Kenya.

Most people who oppose the president don't need to be told these things. These are extreme (but increasingly mainstream) examples of criticisms of President Obama. Nevertheless, these allegations represent an extreme example of a fundamental problem in America: Facts have started to become irrelevant.

I have come to expect this from politicians. It disappoints me, but I no longer expect most politicians to be straightforward. They simplify. They pontificate. They talk in code and refuse to stray from carefully crafted, poll-tested talking points.

The structure of most news programming doesn't lend itself to the presentation of facts. At best, a newscaster presents a topic, then invites a Democratic and Republican pundit to debate it. The pundits, using those same carefully crated, poll-tested talking points, argue. One will say such-and-such policy will raise taxes on the middle class, and the other will claim the policy will actually result in lower middle-class taxes. Sometimes the arguments involve name calling or humor and will certainly be full of hyperbole.

However, at the end of the argument, when it's time for the next commercial break, that'll be it. The newscaster and the pundits will move on to the next argument. At no point will anyone tell the viewers which pundit was telling the truth or attempt to explain the contradictions. And that's news at its best.

At its worst, it's Glenn Beck.

Unfortunately, this type of opining without factual support has leaked into our everyday discourse. I recently read an exchange on Facebook where one person asserted several points that were inaccurate. In response, someone methodically went through each point and referenced reasonable, independent sources disproving them. The responder ignored the sources and re-stating the same false opinion differently.

This is partially a result of modern media and technology. The wide-ranging access to information on the Internet and the 24-hour news cycle allows people to cherry-pick sources and only read and hear opinions that confirm what they already believe. Information is funneled through ideological bubbles. Conservatives have cable news and blogs that confirm all of their opinions about the worthlessness of government and the destruction of America's future by Democrats. And Democrats have a bubble that, at the moment, mostly complains about Obama and makes fun of Sarah Palin.

This might be mildly entertaining if it was a reality television show and the future of our country wasn't at stake. But it is. The deficit is real. Unemployment is real. The government can't spend our way out of recessions or double-digit unemployment. Public policy is too complicated for it to be that easy.