Biography of a Bomb 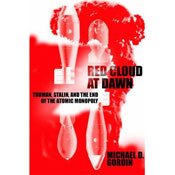 On July 24, 1945, President Harry Truman approached Soviet leader Joseph Stalin and told him the United States had developed a "new and powerful weapon." After years of deceiving their Soviet allies, the Americans confessed that they had successfully tested the world's first atomic bomb the week before. To Truman's surprise, Stalin was unmoved by the news. Only later would the Americans discover that Stalin already knew about the atomic bomb, thanks to Soviet spies. In fact, the Soviets were already hard at work on their own bomb.

"Red Cloud at Dawn: Truman, Stalin, and the End of the Atomic Monopoly" (Farrar, Straus and Giroux, 2009, $28) by Michael D. Gordin, describes the early years of the atomic age, when the U.S. had a monopoly on nuclear weapons. Gordin describes his book as the biography of a bomb, and the book necessarily moves through a shifting cast of characters, none of whom are brought into sustained focus. The U.S. monopoly ended four years later, when the Soviets tested their own atomic bomb. That test, called First Lightning, turned American strategy on its head and transformed the Cold War into a nuclear conflict.

The U.S. had counted on its monopoly lasting longer. Americans could not match the Red Army tank for tank, but atomic weapons balanced the strategic equation, without the need for a massive buildup in conventional arms. The trillion-dollar question was how long the monopoly would last.

The U.S. had virtually no spies within the Soviet Union at this time, so all they could do was guess. American scientists warned that Soviets had the expertise to develop a bomb within five years. Leslie Groves, the "atomic general" who had managed the Manhattan Project, countered that it would be 20 years. Most estimates said more about complacent American attitudes toward Soviet scientific prowess than anything else.

The Soviets project was under the supervision of Lavrenti Beria, who "exemplified brutal efficiency in organizing individuals." As the head of the NKVD, which was later renamed the KGB, Beria oversaw the execution of thousands in the 1930s, starting with the man he replaced. By the time he took over the bomb effort, Beria was feared nearly as much as Stalin. Beria expected results, and everyone involved in the project knew that failure would be hazardous to their health.

One of the lingering questions about the Soviet effort is how much it relied on assistance from outside sources, especially spies and German scientists. By far the most damaging spy was Klaus Fuchs, a German-born physicist who worked on the Manhattan Project. Fuchs provided detailed information on the design of the bomb used on Nagasaki. But the most difficult challenge in building a bomb is acquiring and refining the fuel. Fuchs saved the Soviets time, but Gordin makes a convincing case that none of the spy data was crucial. As for the German contribution, the Soviets were too secretive and suspicious to make much use of the scientists they captured.

The Soviet effort was aided most by reports published openly by the American government. Foremost of these was the history of the Manhattan Project by Princeton University physicist Henry DeWolf Smyth. While the report did not disclose technical specifications, it included everything from refineries to reactors, providing Soviet scientists with an invaluable road map enabling them to avoid the dead ends that doomed the Nazi atomic effort.

Soviet scientists were capable of developing the bomb on their own, as their later successes with the hydrogen bomb and Sputnik demonstrated. On August 29, 1949, an "incinerating light" seared the plains of Kazakhstan. The ground shook as a column of fire lifted a mushroom cloud into the sky. Strangely, it was the Americans who announced the Soviet test, after American spy planes detected radioactive isotopes originating from central Asia. President Truman soon exposed the test to the world.

The end of the atomic monopoly virtually assured the development of the hydrogen bomb. In 1952, the U.S. tested a fusion device that was about 600 times larger than the first atomic bomb. The Soviets followed by eventually testing a 57-megaton bomb, more than 3,000 times larger than the Hiroshima bomb. Most people fail to recognize that hydrogen bombs are far more destructive than the bombs the U.S. dropped on Japan.

The Soviet test marked the beginning of a huge expansion in nuclear weapons production. In 1949, the U.S. possessed a few hundred atomic bombs. By 1963, the U.S. had more than 30,000 nuclear warheads. The Soviets manufactured even more. Meanwhile, the two countries conducted more than 400 atmospheric tests and more than 1,000 tests underground. Twenty years after the end of the Cold War, radioactive fallout from the tests remains with us, and thousands of warheads are still ready to launch at a moment's notice.

But "Red Cloud at Dawn" provides crucial insights into a period we tend to take for granted. Gordin reminds us how quickly and unpredictably the world changes. As we grapple with a new age of proliferation, "Red Cloud" warns us that a country determined to develop nuclear weapons will almost certainly succeed. It's only a matter of time.