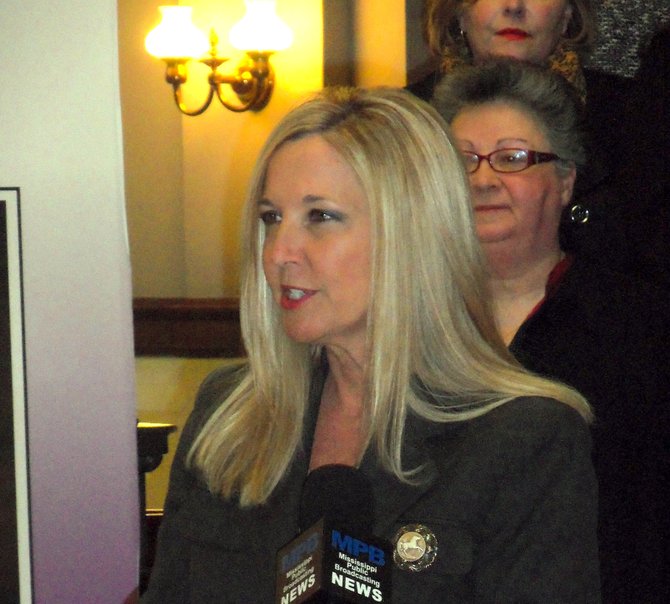 This morning, Sandy Middleton, executive director of The Center for Violence Prevention in Pearl, and Mississippi Attorney General Jim Hood joined together to announce the beginning of services at the center's Sexual Assault Crisis program.

When it comes to preventing sexual assault and rape, creating a culture of deterrence may be the most important aspect of addressing the problem.

This morning, Sandy Middleton, executive director of The Center for Violence Prevention in Pearl, and Mississippi Attorney General Jim Hood joined together to announce the beginning of services at the center's Sexual Assault Crisis program. It will encompass a comprehensive group of services designed to support victims, increase the rates of reporting sexual crimes and prosecute offenders.

"(Sexual assault) is not about lust and desire," Middleton said. "It's a violent crime of power, control and dominance."

The statistics stunned Middleton, and she put the numbers into perspective:

Sexual crimes are vastly underestimated, and few rapists do time. One in four women and one in six men will experience a sexual assault in their lifetimes, and seven out of 10 victims know their attacker. Fewer than half the victims ever report attacks to police. Of every 100 attacks, police only make 12 arrests; only three rapists out of 100 will ever spend time in prison.

Local hospitals are responding to the needs of victims by requesting more training and working with the center and its partners in the community to increase the numbers of sexual-assault nurse examiners, or SANE nurses, Middleton said. "We're training like crazy," she said to ensure victims get the help they need.

The AG's office has worked to ensure that the issues of domestic violence and sexual assault are on the front of the public and lawmaker's minds. One of Hood's office's victories is changing state law so that an offender is arrested as the result of a domestic-violence complaint, which increases victims' trust in the system to protect them and deters abusers.

"We've got a lot of work, yet, to do," Hood said. The recent campaign season pointed to some of the pervasive attitudes about rape, such as the myth that a woman can't get pregnant from rape.

"We have to change the way we think about it," Hood said.

The attorney general announced his intention to push for legislation that would allow for DNA testing and prosecution in cases of statutory rape. When a teenage girl gets pregnant and the father of the child is over 21 years old, it's a crime, he said, and the man should be brought to justice. "Someone's going to jail," Hood said. His hope is that such a law will have an impact on teen pregnancy rates.

On the other hand, "you can't prosecute your way out of this situation," he said. Education, including putting a batterers' intervention program in every jurisdiction, is key to creating a culture where rape and sexual assault is unacceptable to the community. "Guys who are beating on their wives should get some kind of education," Hood said, that enables them to break the cycle of violence in families.

The Center for Violence Prevention introduced the first batterers' intervention program to the state of Mississippi. Now operating in several counties throughout mid-Mississippi, and paid for by the offenders, the recidivism rate for the men and women who complete the program is less than 1 percent.

"The great thing about prevention in this area is that it works," Hood said.

The Jackson Free Press is proud to be among the community's strongest advocates for the work that the center has undertaken. Through our annual Chick Ball, concerned citizens have helped us raise thousands of dollars to continue the difficult work of protecting victims of domestic violence and sexual assault. Please read Does Jackson Need Another Rape Crises Center?