Does Jackson Need Another Rape-Crisis Center? 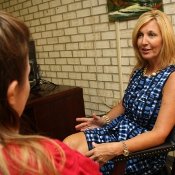 As the Jackson Free Press has done since 2004, on July 28, we will host our eighth annual Chick Ball to benefit the Center for Violence Prevention in Pearl.

This year, the funds raised during the Chick Ball will help the center fund a rape-crisis center for central Mississippi. During an interview with Shalotta Sharp of the Mississippi Coalition Against Sexual Assault, we asked her if Mississippi had enough trained rape-crises advocates.

"We don't have nearly enough people trained in Mississippi," she responded. "... [W]e have half or less than half of what we need."

Sandy Middleton, the center's executive director, selected how the Chick Ball funds will be directed. In a letter aimed at potential sponsors, she wrote: "Unfortunately, rape victims often find themselves with NO choices due to a lack of advocacy and victim services. The center has pledged to change that, and with continued help from the JFP and the community, we can reach out to these victims as they face this traumatic occurrence."

The JFP Chick Ball is your opportunity to make the center's vision a reality. As always, the event will be fun and funky with a cover charge of only $5 for anyone 18 years of age and older. Once inside, you will find all sorts of fun ways to help raise additional funds, including the city's best silent auction with dozens of gift packages and art by local artists.

Sponsorships are still available starting at only $50. We also have plenty for volunteers to do, from distributing flyers to helping decorate. For more information, contact Erica Crunkilton at 601-362-6121 extension 16, or email [e-mail missing] and follow on @JFPChickball.