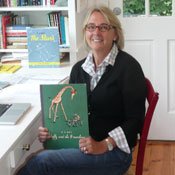 Children's book author Louise Borden's research into the couple behind Curious George took her from Paris to Hattiesburg.

Louise Borden was looking through a copy of Publisher's Weekly in 1995 when she learned a curious fact. A short article mentioned that children's authors H.A. Rey and Margret Rey had escaped the Nazi occupation of France on bicycle carrying the first manuscripts of what would be "Curious George." When police stopped them on their journey and found illustrations for the book, they decided the Jewish couple was harmless. The Reys made it out of Europe alive and moved to the United States.

The image of escaping Paris on bicycle stuck in Borden's head. She was also a children's author of a dozen books who admired the Reys. (She now has published 26 books with several more in various stages.)

Something deeper connected to her to the Reys' escape story. Borden, who graduated from Denison University in 1971, majored in history with a focus on World War II resistance movements in Europe. As a college student in Ohio, she read and wrote about everyday people who experienced similar brushes with Nazi forces. She knew this story about the Reys was a book she had to write.

"I started a folder," Borden said. In it, she put the article and some notes. "It was a seed of an idea." Borden wrote Houghton Mifflin, the publisher of the Reys' "Curious George" books. But her mother got cancer that year, and her family had other challenges to tackle. When she was ready to devote time to the research in 1996, it was too late to talk to Margaret Rey who died that year.

The publishing company put Borden in touch with the executor of the Reys' estate. Borden learned that the executor had faithfully carried out Margret Rey's express desire that all the manuscripts, notes and papers that belonged to her and to H.A. Rey go to the most esteemed archive of children's literature in the nation: the de Grummond Children's Literature Collection at the University of Southern Mississippi. "It's one of the most important collections in the country,"Borden said.

Borden would visit Hattiesburg three times to view the archival collection at Southern Miss. The first visit was in 1999, and Borden met Dee Jones, curator of the de Grummond Collection then.

The library staff hadn't yet unpacked the boxes of calendars, maps, notes, drawings and letters belonging to the Reys. Borden was able to look through the raw data before many others.

She wrote down the return addresses and made photocopies of documents to take back to Ohio. When her husband went on a business trip to France, she tagged along in search of the hotel in Paris where the Reys lived. Slowly, over several years, she pieced together the story of the bicycle escape.

"I had a large tracking calendar for every day," Borden said. She plotted the events and places culled from letters and H.A. Rey's meticulous calendar. "I wanted to draw a line on a map and show children this amazing adventure."

When the Nazis came into Paris, the Reys were some of the last people in their building. H.A. Rey went to a bike shop and found the only bike left was built for two. He bought the tandem bike and he and Margaret tried it out, but they soon realized it wasn't working. H.A. went back to the bike shop and bought enough spare parts to build two bicycles. And he did it in about two hours.

"I am not sure I would trust a bicycle my husband built during wartime," Borden said. "H.A. was very intellectual. He was mechanical. He studied science and engineering. He wanted to go to medical school, but he had no money. He built a big globe he constructed for his studies of the stars."

The two bicycles held up for the ride out of Paris and 75 miles more to Orleans. Borden retraced the route, but not on bicycle. "I drove out of Paris, which is scary enough," she said. In Orleans, she got on a train at the same stop the Reys got on with their bikes.

"Back then, bicycles were a big form of transportation," Borden said. "Bicycles were very important and valuable. It seems kind of primitive to us now."

Borden's book came out in 2005. "The Journey that Saved Curious George: The True Wartime Escape of Margret and H.A. Rey" (HMH Books, 2005, $17) is geared to third to sixth grade students. It's a heavy subject that Borden treats in a straightforward manner.

"People ask me why I write books for children," Borden, 62, said. "I take a complicated subject and make it accessible." Before becoming a published author, Borden spent almost 20 years as a teacher's assistant and read "Curious George" to her classes. Now, she still reads them to her three grandchildren.