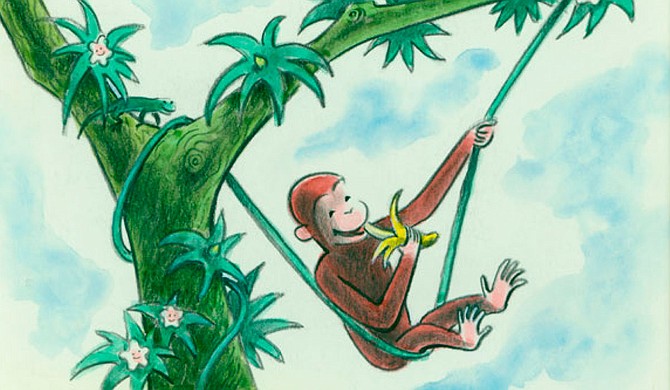 The University of Southern Mississippi's Curious George Collection returned to its home in the de Grummond Children's Literature Collection on the USM campus on Monday, June 10, after the end of a two-year tour in Japan.

NHK, Japan's public television broadcasting organization, contacted USM to request the traveling "Curious George" exhibit in 2016. Representatives of the network also traveled to Hattiesburg to research the project. The exhibit, which launched in Tokyo in August 2017, traveled to six cities and attracted more than 149,000 visitors, the release says.

The Curious George Collection includes original illustrations and manuscripts from the books' creators, H.A. and Margret Rey. The Reys, who were both Jewish, created "Curious George" while living in France in early 1940. On June 14, 1940, the couple fled on bicycles hours before the Nazis occupied Paris, taking their manuscripts with them. They traveled through the French cities of Orleans and Bayonne and boarded a train to Spain, then passed through Libson, Portugal, and Brazil before settling in New York City.

In New York, they signed a contract with the Boston-based Houghton Mifflin publishing company and published four children's books in February 1941, then published the first "Curious George" book later that year.

Lena de Grummond, a former professor of library science at USM, founded the de Grummond Collection in 1966. She collected original materials from children's book authors and illustrators such as the Reys through handwritten letters, USM's release says. Today, the collection contains original manuscripts and illustrations from more than 1,300 authors and illustrators, as well as more than 180,000 American and British books from as far back as 1530, the release says.

The National Alliance on Mental Illness, a nonprofit group that supports people who suffer from mental illnesses and their family members and caregivers, presented Belhaven University Provost Brad Smith with its Excellence in Mental Health First Aid Community Impact Award on May 16, 2019.

NAMI presented the award as part of its annual gala at the Belhaven campus. The organization also honored 14 other mental-health advocates, educators, doctors and researchers during the event. Among them were political cartoonist Marshall Ramsey; Tonya Ware, executive pastor of The Church Triumphant Global in Jackson; and Wendy Bailey, chief of staff for the Mississippi Department of Mental Health.

Smith is a licensed psychologist who has been practicing for more than 20 years, a release from Belhaven says. He founded the university's Institute for International Care and Counsel, which helps faith-based organizations around the world organize to offer mental-health services, and serves as the institute's director. He is also the former director of strategic innovation for the Mission Advanced Research and Communication Center of World Vision International, which is a Christian humanitarian aid and advocacy organization.

He is a certified instructor in both adult and youth mental health first aid, a national program from Mental Health First Aid USA that teaches people to recognize and respond to early signs of mental illness and substance abuse, and served as the first cross-cultural and international track leader for the Christian Association for Psychological Studies. He serves as a speaker who advocates for global mental health through the American Association of Christian Counseling.

The Thurgood Marshall College Fund and Apple recently awarded Jackson State University a $75,000 grant for its Women RISE proposal, which JSU created in partnership with the central Mississippi chapter of the National Coalition of 100 Black Women Inc.

As part of the partnership with Apple through Women RISE, JSU will host a one-day symposium on Sept. 12, 2019, at Eagle Ridge Conference Center in Raymond, Miss. Apple representatives will conduct a session on coding with the programming language Swift at the symposium, JSU's release says.

To register for the symposium, visit https://www.surveymonkey.com/r/WomenRISE2019.