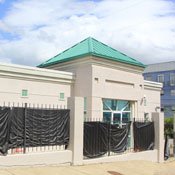 House Bill 1390 would require doctors who practice at abortion clinics, like the Jackson Women's Health Organization, to get admitting privileges at a local hospital.

With personhood legislation finally out of the spotlight, lawmakers are taking aim at smaller anti-abortion issues, like placing new restrictions on abortion providers.

HB 1390 would require all physicians associated with an abortion facility to have admitting privileges at a local hospital. The bill would also require those physicians to be board certified or eligible in obstetrics and gynecology, and a staff member trained in CPR would have to be at the facility at all times.

Barbara Whitehead, president of Mississippi Right to Life, said doctors who perform abortions should be part of the local medical community. "If something goes wrong, then that doctor can continue the care in a local hospital," she said.

Shannon Brewer, director of the Jackson Women's Health Organization, the only abortion clinic in the state, said that in the past, local hospitals would not give the clinic's doctors admitting privileges.

"I personally just feel like it's because we do abortions," she said.

All of the doctors at the clinic are already certified OB-GYNs, Brewer added.

Jack Mazurak, spokesman for the University of Mississippi Medical Center, said only UMMC faculty can have admitting privileges there. Robby Channell, spokesman for Baptist Health Services, said performing abortions would not keep physicians from getting admitting privileges at the hospital, although they would have to meet certain certification and insurance requirements.

Brewer said the bill would affect the clinic directly, if it passes.

"But of course, that's what they're trying to do, because our doctors are from out of state," she told the Jackson Free Press.

Local doctors who have worked at the clinic in the past have faced pressure and harassment for performing abortions, so they quit, Brewer said.

The House also passed a bill to require doctors to check for a fetal heartbeat before performing an abortion.

While the bill's description initially suggested it would only require a woman to acknowledge a fetal heartbeat and sign a waiver, the most recent version says it would ban abortions if the doctor finds a fetal heartbeat.

The bill actually contains both provisions, presumably since the courts are unlikely to uphold the section banning abortions after doctors can detect a fetal heartbeat.

Nonetheless, Personhood Mississippi President Les Riley sent out a statement after the bill passed the House saying that under the current version, the bill would outlaw abortions after a fetal heartbeat is detectable.

"The intent appears to be that if the Senate passes this bill, that surgical abortion in this state will largely be eliminated," the statement said.

"This bill is unconstitutional, and could ban all abortions as far as five to six weeks into pregnancy, before many women know they're pregnant," Brown-Willams said.

The Christian Action Commission, the political arm of the Mississippi Baptist Convention, sent an email to supporters expressing concern over whether the Senate will take up the bill. The organization blamed Lt. Gov. Tate Reeves and Senate leaders for letting their own anti-abortion bills die in committee.

Rep. Andy Gipson, who introduced the bill, was not available for comment.

Both bills now go to the Senate.