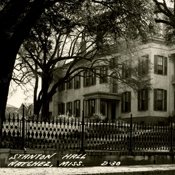 Stanton Hall, built by an Irish immigrant, is now a stopping point for tourists.

In the early part of the 19th century, a group of people traveled to Mississippi to escape some of the ethnic prejudices they faced in other parts of the country. Although fewer in number here than in other places, Irish immigrants contributed to many areas of Mississippi culture, from building grand mansions to founding towns to serving the church.

In "Ethnic Heritage in Mississippi: The Twentieth Century" (University Press of Mississippi, 2012, $40), Celeste Ray writes that some of the first Irish immigrants came to the Natchez area of Mississippi, where the Spanish colonial government sought English-speaking Irish priests to help convert British settlers to Catholicism.

Other people of Irish descent came later; some from Ireland and some from the Northeast. Whereas in northern cities large numbers of Irish immigrants faced discrimination and banded together into their own communities, Irish immigrants to Mississippi came in smaller numbers and assimilated into southern culture, Ray writes.

Many immigrants worked building railroads and canals, but others became wealthy business or plantation owners.

Frederick Stanton, an Irish immigrant, built one of Natchez's now-famous white-columned mansions in 1858 and named it Belfast. Stanton made a fortune in cotton and owned more than 16,000 acres of cotton plantations. He died a month after his home was finished.

The house is now known as Stanton Hall, and is a stop for tourists during the spring and fall pilgrimages in Natchez.

The Newton County Historical and Genealogical Society found several Irish families who settled in the area during the early 1800s. Several families from County Antrim in Ireland sailed on a ship called the Caledonia from Belfast, Ireland, to Charleston, S.C., in 1822. Some of them migrated west to Mississippi and settled in Newton County, in an area that came to be known as New Ireland.

Other Irish immigrants came through the Port of New Orleans to settle in New Ireland and in other areas, including Kemper and Neshoba counties.

Other Irish immigrants came to Mississippi through the Catholic Church. Several bishops of Natchez were born in Ireland, including John Edward Gunn. Gunn was born in County Tyrone, Ireland, and was appointed the sixth bishop of Natchez in 1911. During his time as bishop, the number of Catholic churches in the area almost doubled.

One story says that in 1915, while he was visiting an archbishop in Detroit, Mich., a German spy poisoned the soup at a banquet with arsenic. Gunn and four others were poisoned, but he survived. His will says, "In life and in death I am proud of three things: My Irish birth, my Catholic faith and my American citizenship."