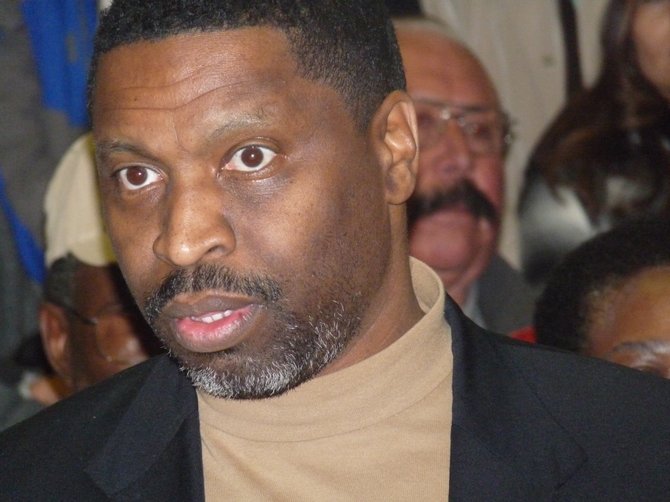 State NAACP president Derrick Johnson is 99.999-percent sure that the state voter ID law will not be active in time for this November's election. Photo by File Photo

There will be no voter identification requirements at the polls in Mississippi this November, according to state NAACP president Derrick Johnson.

Johnson spoke to citizens at Koinonia Coffee House's Friday Forum this morning. He said he is 99 percent sure that there is no way the state can implement its recent voter-ID law in time for this year's election. One major hurdle for the law is the U.S. Department of Justice has to approve it. For the DOJ to do so, Secretary of State Delbert Hosemann must send all the state's plans to the department, which Johnson said he has not done yet.

A letter dated June 20 (see document below), from the DOJ to the state Attorney General's office, shows that as of that date, the DOJ was not satisfied with the information it had received.

Letter from DOJ to Mississippi re voter ID 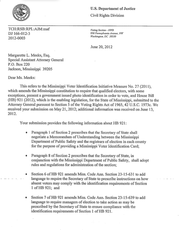 "The review by the Justice Department is 60 days. They have requested another 60 days," Johnson said. "Even if it (is approved), based on what has happened in South Carolina and Texas, where they did not pre-clear it, it may end up in (Washington) D.C. District Court. So there will be no voter ID for this November."

If the DOJ approves the Mississippi law, Johnson said the NAACP will adjust to help the voters affected to get the needed identification.

Father Jeremy Tobin, secretary of the Mississippi Immigrants Rights Alliance, said that Hosemann is not a friend to voters. Hosemann has put out postcards and flyers that read, "When approved, Mississippi's new Voter ID law will require voters to show identification at the polls."

"This is bogus. We do not have the voter ID. It's designed to defuse people. If you see anything like that, call Derrick (Johnson), call MIRA, call somebody and report it," Tobin said after Johnson's presentation.

Johnson said Common Cause, a nonpartisan, nonprofit advocacy organization, is leading the push to pass a federal law against deceptive voting practices. Hosemann's flyers, which may lead voters to believe they are subject to a law that does not yet exist, could fall under that proposed law, Johnson said. Currently, though, there is no federal law against such practices.

While voter ID is not on the books, Johnson believes those who want to deter voters will find other ways to do so. On election day, Johnson said NAACP will have a group of lawyers on standby to take action when citizens report any acts of voter discrimination or intimidation.

Four years ago, an employer in Greenville attempted to prevent some 400 employees from voting by making them work late and not allowing them to leave to vote. Johnson and NAACP lawyers stepped in and made sure those employees' were able to exercise their right to vote.

"Devices such as that should not be used to influence elections," Johnson said.

The NAACP has a hotline which voters can call to get information on registering to vote and polling locations, or to report election abuses on election day. The number is 1-866-My-Vote-1 (1-866-698-6831).

Correction: An early version of the story did not mention that Johnson said Secretary of State Delbert Hosemann has not yet turned all the information to the Department of Justice. It also did not include the third paragraph about the letter from the DOJ, or the link to the DOJ letter. We apologize for the omissions.

We need to register voters in Mississippi. Well said Derrick.

voters should have to have ID to have proper voting, or are we allowing felonies as well as illegals to vote

voters should have to have ID to have proper voting, or are we allowing felonies as well as illegals to vote

It's called voter registration and we already do it.

Very interesting piece on Maddow the other night points to something that I've been saying about Voter ID for a while... who gets to judge if your ID is good enough? Poll workers? Poll watchers?

Good News! Just watch this play out. The rush for voter ID is all about "Taking our country back" and the translation is: Get Obama and his family out of OUR White House. This will become a non-issue once THIS Nov. election is over.

I saw the Maddow report. I am also in agreement with the fact that voter ID is a solution looking for a problem. So much time an energy have been spent by our lawmakers on issues that will deliver absolutely nothing to bring MS from the bottom of everything that is good and the top of all that is bad. We can do better. There are many progressive thinkers who will not sit idly by a watch MS continue to focus on issues that will fast tract a down-hill spiral.

"I saw the Maddow report."

Yeah, and I heard the Limbaugh report too. I'm sure they're both chock full of truthiness.

Whether you agree with her politics, Maddow is actually a journalist. Limbaugh is not. There is no comparison between the two.