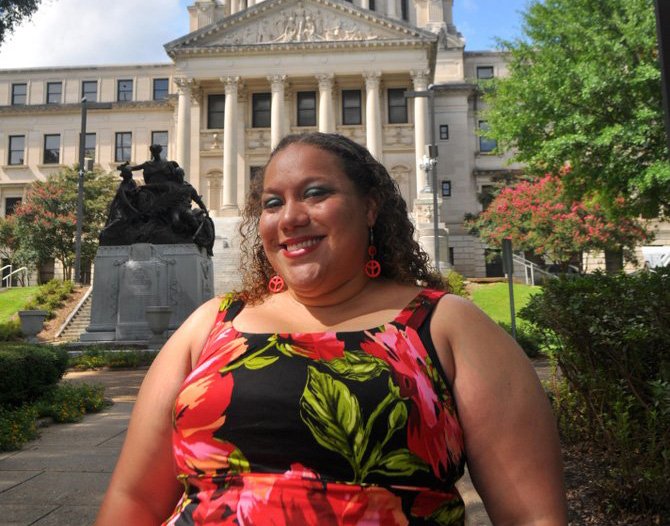 When she was 18, Laurie Roberts lay on a hospital table on the edge of life. "Please don't let them kill me," she begged the anesthesiologist who prepped her for surgery.

Earlier that day, the same hospital had turned the pregnant Roberts away.

"They said, 'You are definitely having a miscarriage, but there is still a faint heartbeat, so we can't do anything for you,'" she says.   The Catholic hospital was the only hospital in her community, and it did not provide abortions even in emergencies. Roberts' surgery only came after she began to hemorrhage and nearly bled to death.

"All I could think of was that I wanted to get home to my two girls," she says.

Sixteen years later, Roberts is a feminist activist, a mother of seven and a doula. She is also the Mississippi state president of the National Organization of Women, where she advocates against anti-women legislation. She sends email blasts live from the state Capitol as she speaks to lawmakers and others about the consequences of anti-women bills. She usually has an entourage of her children in tow.

"I'm just a mom," she says. "I just put on my shoes and jumped into the Capitol. I just showed up with a laptop and  a notebook."

In 2005, when she was 27, Roberts attended Jackson State University, where she studied political science. There, Roberts learned that social issues were connected.

"They were all inclusive," she says. "I couldn't work on issues of race and class without working on gender. That just kind of pushed me into being a black feminist."

Roberts also works as a doula, which she describes as a woman with birth knowledge who is there to provide emotional and physical support to mothers. "Birth is a woman's time," she says. "Not that men should not be there, but it's a time for women to  support women."

Roberts sees her work as a doula as a positive way to help women during and after their pregnancy. "(Mississippi has) the highest infant-mortality rate in the country, especially in women of color and low-income women of color. I think doulas could do a lot to help," she says. "Research shows that women who have doulas at their births have better birth outcomes and their babies have better outcomes."

Eventually, Roberts wants to head up a community doula program in Jackson.

Pro-life activists may see Roberts work as a feminist and a doula as contradictory, but she seems them as simultaneous acts.

"It's all about options," she says.

"Women have to have choices, whether it's choices like when to become pregnant, the choice to proceed with their pregnancy or how to deliver their baby. To me it makes complete sense. It's a continuum of women owning their reproduction and their reproductive choices."