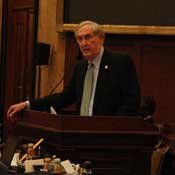 Rep. Bill Denny, R-Jackson, has been in the state Legislature since 1988.

State Rep. Bill Denny, R-Jackson, is a hard man to find. He doesn't seem to have a campaign website or someone to send out press releases. When I called the number listed on his official page at the Mississippi House's website, his wife was apologetic, but said he was a busy man and not interested in an interview. When a coworker gave me his cell phone number, he reiterated that he was busy and said he did not have time for an interview as he was in the middle of door-to-door campaigning.

As much as I respect a man for putting in the legwork of door-to-door campaigning, when I'm on deadline, I do like for elected officials to at least let me make an appointment for a five-minute phone interview, so I called back another day. Denny was out campaigning again, but I got in one question before he said someone was coming up the street to talk to him, and he had to hang up.

It's too bad. Denny's opponent, Dorsey Carson, told me Denny had voted against the Mississippi Adequate Education Program, and I wanted to ask him why. I also wanted to ask him about payment in lieu of taxes and whether the state should pay the city for the infrastructure it uses in and around state-government buildings. I'm told he voted against that as well, but I haven't been able to get him on the phone long enough to confirm it.

For now, I can tell you that Denny has been in the Legislature since 1988, he went to the University of Maryland, and he wants you to re-elect him.

If you are re-elected, what are your priorities for next term?
Economic development, jobs and crime, and just put all those in a nutshell--I've been working on those for years. One thing I'm particularly interested in ... we don't have (a charge for) attempted murder in the statute. If you go out and shoot somebody and put five bullets in them and they live, the most you can be charged with is aggravated assault. So, being tough on crime and balancing the budget. ...

(Another priority), of course, is going to be no taxes, no increase in ad valorem taxes in our districts.

I'm most interested in economic development. We've had the House stymieing the governor for years. ... We intend to put a Republican in charge, in the speaker of the House, and then balance the House.
What Billy McCoy has done for the past eight years has just disenfranchised about half the House. He doesn't have any Republicans in the House in chairmanships, ... so as a result of that, we don't have any power in getting a bill out of committee, and that's the main reason I'm running.