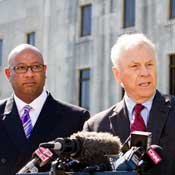 Morris Dees is not singling out Mississippi in his organization's efforts to seek justice for an alleged hate murder of James Craig Anderson because he was black.

Speaking to reporters on Monday at the Hinds County Courthouse, Dees, chief trial counsel with the Southern Poverty Law Center, said his organization has filed similar lawsuits in Long Island, N.Y., and Linden, Texas. In 2008, a group of teenagers in Long Island, N.Y., beat Ecuadorian immigrant Marcelo Lucero, and one teen, Jeffery Convoy, stabbed him to death. A judge sentenced Convoy to 25 years in prison for manslaughter as a hate crime, but acquitted him of the hate-crime charge for murder.

In Texas, the organization helped Billy Ray Johnson, a disabled black man, receive $9 million in damages after four white men beat him in 2003.

Jackson attorney Winston Thompson III of the Cochran Law Firm and the Southern Poverty Law Center, based in Montgomery, Ala., filed a wrongful death suit on behalf of Anderson's family, against Deryl Dedmon, John Aaron Rice, Sarah Graves, Shelbie Richards, William Kirk Montgomery and Dylan Butler, all of whom are 18 or 19. One 17-year-old defendant is included as well. The lawsuit states that on June 26 the group of teens took turns beating Anderson in the parking lot of the Metro Inn hotel in Jackson.

Thompson said the family is still grieving and decided that they were not ready for public interviews on Monday.

The lawsuit accuses the white teenagers of intentionally setting out June 26 in two vehicles to "go f--k with some n----rs" in Jackson. Anderson was in the Metro Inn motel parking lot in Jackson when he was first beaten. During the attack, one of his attackers shouted, "White power!" according to the lawsuit.

Defense attorneys claim that the teens came to Jackson with the intention of buying alcohol and that Rice was trying to help Anderson who was locked out of his car. When Dedmon arrived, they claim that's when an altercation took place.

The family is seeking to recover "all damages arising of out the personal injuries sustained by Anderson," including but not limited to funeral costs, loss of career, future earnings, cash value for the life of the decedent, and pain and suffering.

"On the civil side, all we can get is money damages. On the criminal side, we are looking at potential incarceration," Thompson said.

Thompson added that the investigation is ongoing and could not answer questions about why Anderson was the parking lot of the Metro Inn at 5 a.m. June 26. He also could not say if the teens had a prior history of violence against blacks.

The lawsuit, filed today, accuses all the teens of battery. It accuses five of them of negligence by failing to intervene, alert law enforcement, provide medical aid or transport Anderson after the beating.

"In this complaint, it's important to note that the legal liability and responsibility of those involved in this doesn't mean that they even had to have gotten out of their vehicle," Dees said. "They had the duty once they saw what was taking place to call the police, to get out and aid Mr. Anderson or prevent him from staggering around helplessly after he had been beaten."

Dedmon's attorney, Lee Agnew, and Rice's attorney, Samuel Martin, were not immediately available to comment on this story.

Ummm...Bubba? You sure that's the sword you want to fall on?

Ahhh Todd, no sword to fall on, because to "fall on one's sword" means to commit sucide, admit an error, or to accept the blame or responsibility for something. I have done none of those things. I'm asking a legitimate question. If the teens had duty to help Anderson why wasn't it the hotel's staff, security, and other witness duty too? They were there too when it happened. Why not sue them too? Be alot more likely to get money from hotel than the kids.

A two year old was killed in a drive by shooting last night. Anyone going to file a wrongful death suit against the shooter in this one or is there not enough hate in this one? C'mon southern poverty center and all you attorneys who care only for the victim let's see you jump on this one. Oh... we need to see if the shooter is white first because white people have money and can be sued? What's your angle on these things? How do you decide who's life is more important? How do you people live with yourselves? I'm not speaking to JFP I'm speaking to those morally bankrupt "poverty" organizations who don't give a rat's ass that a two year old child is dead because it's not white on black.

Bubba, it sounds like you want everyone but the folks who did the crime to be sued? I have no problem if the family wants to sue them, too -- that's their perogative -- but it sounds like you want to protect the families from responsibilities for their children's actions. That seems inconsistent with some of your past statements, somehow. And Alex, you have a logical problem. Just because an organization like SPLC -- which exists to deal with situations like this -- doesn't bring a lawsuit in a different crime case doesn't mean it doesn't give a "rat's ass" when a child is killed or that it is "morally bankrupt." Actually, I'm pretty happy that there is an organization based right int he South, employing many southerners of all races, that will take on situations such as these and help send the message to unreformed white supremacists that our society won't tolerate it. That is a separate situation than dealing with others types of crime, which needs to happen, too. Why can't your head handle a world in which both things or possible? You seem very stuck in a binary, either-or rut -- and if you're not careful, you're doing to end up sounding like Bubba often does here: defending the white guys/practices while kicking and screaming about blacks do. There is nothing different in that approach; we've all seen it, and many of us are sick and tired it. THAT is precisely what a group like SPLC is so vital. And the fact that an organization that exists to deal with the effects of current and past racism (which includes poverty) files a lawsuit in no way means that any other families who are victims of crime may not, or cannot, bring a wrong-death suit. Sometimes -- think O.J. Simpson -- it can be the only way for families to get relief. Personally, I want to know where every gun used in a crime around here comes from.

[quote]A two year old was killed in a drive by shooting last night. Anyone going to file a wrongful death suit against the shooter in this one or is there not enough hate in this one? C'mon southern poverty center and all you attorneys who care only for the victim let's see you jump on this one....I'm not speaking to JFP I'm speaking to those morally bankrupt "poverty" organizations who don't give a rat's ass that a two year old child is dead because it's not white on black. [/quote]Really? Why come onto the JFP site to whine at the SPLC?

Jeff has a good point, Alex. Why don't you just call the SPLC in Montgomery and ask them. I'm sure they'd take your call.

You got to be joking, Alex. I can't imagine anyone not seeing the difference between the two cases.