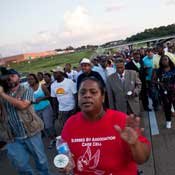 Metro area residents held a vigil for James Craig Anderson after a group of white teens killed him in a hate crime.

This morning, the family of James Craig Anderson, killed in what prosecutors call a hate crime in Jackson earlier this summer, filed a wrongful death lawsuit against seven teenagers, including Deryl Dedmon and John Aaron Rice. The Southern Poverty Law Center, based in Montgomery, Ala., is working with local attorney Winston J. Thompson III and the Cochran law firm.

The lawsuit accuses seven white teenagers of intentionally setting out in two vehicles June 26 to "go f--k with some n----rs" in Jackson. Anderson was in a motel parking lot in Jackson when he was first beaten. During the attack, one of his attackers shouted, "White power!," the Southern Poverty Law Center asserts.

The SPLC reported the lawsuit on its site this morning, names other defendants.

The family is holding a press conference now at the Hinds County Courthouse to announce the suit. JFP news editor Lacey McLaughlin will have a full report in the JFP Daily today. Subscribe here free.