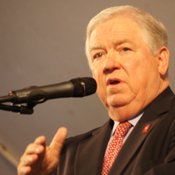 Speaking to reporters after the Mississippi Economic Council's annual Hobnob event for lawmakers, office seekers and members of the business community, Barbour stated that he personally believes "that life begins at conception."

Barbour added that he finds the ballot measure's phrasing--that the word person be defined as every human being from the moment of fertilization, cloning, or the functional equivalent thereof--to be vague. He suggested that the anti-abortion effort would have been better had it gone through the Legislature.

"If somebody had offered legislation in the Mississippi Legislature that says life begins at conception, that would pass," Barbour said. "However, what has been put on the ballot is a little ambiguous."

Because he is a stoic opponent of abortion rights, Barbour's comments caused a maelstrom in the national media and has commentators wondering how much damage to the anti-abortion campaign the prominent Republican's remarks might have caused.

In the meantime, fellow Republican Lt Gov. Phil Bryant, co-chairman of the Yes on 26 campaign and who is hoping to succeed Barbour, hasn't been swayed by Barbour's trepidation.

Dan Turner, a spokesman for the Bryant campaign, said the the lieutenant governor remains a firm supporter of Initiative 26 and doesn't think that it's in jeopardy based on the governor's public expression of concern. Turner would not speculate on whether Bryant would like to see the Legislature take up the issue in the event the initiative fails.

The Democrat in the governor's race, Hattiesburg Mayor Johnny DuPree, said of the issue: "The wording is what it is. It's on the ballot; people are going to vote for what's on the ballot."

Pressed on whether he planned to vote for it, he said he didn't have 15 minutes to articulate his position on the subject. "I think I've made it plain what I'm going to do with the Personhood amendment. If you go look, you'll find out where I stand," DuPree told the Jackson Free Press at the MEC Hobnob.

A statement on DuPree's website states that the candidate supports the proposed amendment because he also believes that life begins at the moment of conception, this in spite of concerns he holds about "some of the ramifications, such as on in-vitro fertilization and birth control."

On Tuesday, religious leaders of various faith backgrounds expressed their opposition to Initiative 26 at the Capitol, saying that the measure that would effectively ban all abortions even when the mother's life is at risk could lead to negative and unintended consequences.

Most said that their congregations are divided and that their coming out against the initiative might help clarify things for congregants who question whether opposing the measure conflicts with the principles of their faith.

"People look to their faith leaders when they're struggling," explained the Rev. Carol Borne Spencer of the Episcopal Diocese of Mississippi.

Pressed on whether he planned to vote for it, he said he didn't have 15 minutes to articulate his position on the subject. "I think I've made it plain what I'm going to do with the Personhood amendment. If you go look, you'll find out where I stand," DuPree told the Jackson Free Press at the MEC Hobnob. I'm disappointed in Mayor DuPree. There's a better answer to that question, because 26 is ill-conceived and poorly worded. You can be anti-abortion and still be against 26, exactly the more reasonable stance articulated (if that's the word for it when he talks) by Governor Barbour.