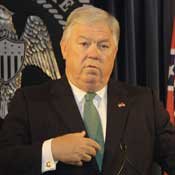 "To the Freedom Riders yourselves, our state does celebrate and thank you for your courage, your commitment, your suffering and your sacrifices of 50 years ago. We apologize to you for your mistreatment in 1961, and we appreciate this chance for atonement and reconciliation."

In an ideal world, Gov. Haley Barbour's remarks at the opening reception of the Freedom Riders' return to Jackson yesterday at the Jackson Marriott would not have raised an eyebrow. Of course, many would respond, the governor of a state would apologize to good people who were arrested and taunted and some beaten, and then put on Parchman's death row, merely because they walked into a "white" waiting room. In a more perfect world, it wouldn't matter whether a governor was a Republican or a Democrat; he or she would speak the obvious to the Riders sitting in front of him 50 years later.

But we have not lived in that world, at least not until now. Current generations of Mississippians have grown up in a state still divided in many ways over race, and with politicians who have tried to keep us divided by drawing votes from certain elements that still want us divided. It is a state where Republicans have steadfastly refused over the years to sign onto anything approaching an apology for civil-rights wrongs and violence in our past.

Our Republican lawmakers in Washington refused to sign a resolution in 1989 honoring the memory of James Chaney, Andrew Goodman and Michael Schwerner on the first day of Freedom Summer in 1964. Our two then-senators, Trent Lott and Thad Cochran refused in 2005 to add their names to a federal resolution apologizing for not doing more to stop lynching back in the day, even as Mississippi owns the dubious distinction of having the most lynchings.

When then-Secretary of State Dick Molpus apologized to the families of Chaney, Goodman and Schwerner in 1989 on behalf of the state at the 25th commemoration of their deaths, Gov. Kirk Fordice, a Republican known for pandering to white-supremacist groups such as the Council of Conservative Citizens disparaged him. In a race between the two for governor, Fordice belittled Molpus for making that apology in his hometown.

With that context, it makes more sense to say that Barbour's apology was remarkable, if tragically so. And he is no longer running for president, or anything that we could know of, perhaps making it politically easier to risk losing the voters he has courted, and helped others court, for so long.

Does this mean the evolution of Haley Barbour is complete? That he is putting the southern race strategy, which he helped perfect in his years as a Republican operative, on mothballs? If so, it is a brand-new development.

Not many months ago, Barbour stepped in it when he told The Weekly Standard that the racist Citizens Council in his hometown wasn't so bad. He showed a remarkable ignorance of history when he downplayed his own town leaders' own extreme racism, and he's not the only educated white person in the state who has done so,

He is also the man who has disparaged Head Start programs with talk of piano stools and whorehouses, and recently (while he was still thought to be running for president) even went down that tired Ronald Reagan wink-wink-racist path of conjuring welfare mothers grabbing up all our hard-earned tax dollars. And he declined to send the message that he had changed by simply speaking out against an effort to create a Mississippi license plate in honor of former Klan leader Nathan Bedford Forrest.

But on Sunday, to a packed and diverse audience in the Marriott ballroom, Barbour was forthright in apologizing to the Freedom Riders gathered there. He drew tepid applause when he was introduced, but a prolonged standing ovation when he told the Riders he and the state are sorry for what we did to them. Even if that apology said little to the world at large, the people in that room understood that it was history in the making.

It was good to hear, even as many of us wonder how and if Barbour will back it up with actions showing that he rejects his own political tactics of the past.

Was he believable? Time will tell. Jimmy

Believable? Who's to say? He got burned pretty badly over his ignorant remarks earlier this year over Citizens Council. And I've always seen him as such a strategist that it's hard to believe that everything isn't calculated. Let's see if he surprises us. But serving as governor of the unhealthiest state and suing over universal health care isn't the best way to prove that you mean any of it. Just sayin'.

Donna, if he's breathing, he's calculating. It is second nature for him, I would think.

Well, good for him for doing what he should have done. I'm sorry I'm so cynical, but I'm reminded of Chris Rock talking about men wanting credit for doing what they are supposed to do. "I take care of my kids." "You're supposed to, you dumb *@#$!!" "I've never been to jail!" "What do you want, a cookie?!?! You're not supposed to go to jail!"

Tre- Why was Barbour suppose to apologize for something that happened 50 years ago and he had nothing to do with it in 1961?

It's gonna be interesting to see how this next batch of Ultra Conservative Republicans plan on running the governor's mansion. Cut spending, no new taxes, and run government like a business is the common tag line.

To show he's not you, Bubba.

Donna- you so funny. I think it was legit question,how about an intelligent answer instead of sarcasm,it's so unbecoming,specially from someone who always says they are a serious jouralist. ;)

@ Ladd "To show he's not you, Bubba." PRICELESS! I was trying to think of a response to BubbaT's question. These six words from Ladd speak volumes.

That wasn't sarcasm, Bubba. I'm dead serious. Go think on it a while.

Donna- No need to think on it. I know he isn't me. I would never apologize for something I didn't do or had no part of, it's a sign of weakness. Really disappointed in old Haley.

Well, Bubba, because that is what you are supposed to do as head of the state. You apologize for bad things that happened in your state - it doesn't matter if he was personally involved. He is the governor of Mississippi. If you are going to show up at a Freedom Riders convention, and you are the governor of this state, then you apologize for what happened. Do you even read the stories here, or just sort through the responses to start sh!t with people. Go back and read about the horrible things that happened to these people and try to explain to me why the governor shouldn't offer an apology on behalf of Mississippians - past, present, and future. He did what he was supposed to do.

Tre- born and lived in Mississippi for almost 50yrs. Nothing in these stories I read on here (I do read them), tell me anything I didn't already know before. Yes there were alot of horrible things that happened 50yrs ago,but guess what? I had nothing to do with any of those horrible things. Don't think he needs to be apologizing on the behalf of Mississippians who had nothing to do with it, because most of us weren't even born or were babies in 1961. I have nothing I want him to be apologizing on my behalf for, didn't do it,not apologizing for it. EVER! Beside you know as well as I do that,it's just a hollow meaningless apology. It was all political and ya'll know it. Oh yeah and their are a few of you ,I do just like to start sh!t with, it's fun to get some of ya'll all riled up.

I noticed the reference to former governor Kirk Fordice in this article. The mention of his name in association with racial matters to this day reminds me of his memorable "Mississippi doesn't do race anymore" line during his second inaugural speech; I'm thinking that is because lightening didn't dart from the heavens at that very moment to strike him down.

Is this going to be a requirement for all of our future governors as well? Is this a debate point for the upcoming governor's race? I don't recall Musgrove apoligizing...for anything now that I think on it.

A requirement? No. A debate point? No. Just something a head of state should do? Yes. It happens. Not as much as it should, but it happens. Here is a little article from four years ago from FoxNews about four southern states apologizing for their state's role in slavery. http://www.foxnews.com/story/0,2933,276724,00.html