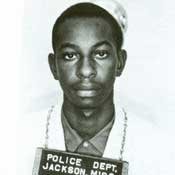 In 1961, 13-year-old Hezekiah Watkins was arrested and taken to Parchman with the Freedom Riders. He was featured in book "Breach of Peace," by Eric Etheridge.

On a sunny day in the spring of 1961, Hezekiah Watkins was just another face in the crowd as he watched the Freedom Riders arrive at the Greyhound bus station on Lamar Street. Itching for a closer look, the 13-year-old sprinted across Lamar Street, but he accidentally ended up inside the station where police arrested the activists who rode interstate buses through the South to challenge Jim Crow laws.

"I was the fastest of the group, and I guess my momentum took me into the bus station," he says. Once inside, a police officer mistook him for a Freedom Rider. "Get over there," the officer said, motioning toward the wall where the Freedom Riders stood.

Police arrested and transported Watkins to Parchman along with the riders. When Gov. Ross Barnett heard that a 13-year-old had ended up in the state penitentiary, he authorized Watkins' release and transport back to Jackson. Waktins points to this incident as the moment he became "a lifelong proponent of justice."

When he was a student at Lanier High School in 1963, Watkins helped organize a walkout along with two other schools to protest segregation at Jackson business establishments. Though school administrators threatened to expel students who participated in the walkout, it didn't deter Watkins.

Watkins estimates that he was arrested more than 100 times in the 1960s. In 1962, Watkins was arrested for marching with Dr. Martin Luther King Jr. in Jackson, and the two shared a jail cell.

"Having the opportunity to listen to him and take in what he was saying one-on-one, as opposed to watching and listening to him on television, had a great impact on me," Watkins says.

The young advocate played an integral role in organizing demonstrations and participating in marches throughout Mississippi.

"We had a great impact," he says, "not only through boycotts, but through voter registration."

Now 63, Watkins owns Corner Food Market and Deli and is a counselor at the Cancer Institute at the Jackson Medical Mall. As for the ongoing struggle for equality, he encourages citizens to be involved in the political process as an effective way to make change.

"The greatest way we can have an impact is at the polls on Election Day," he says. "...That is the way to make our voices known and heard. Dr. King stressed that."

Editor's note: The version of this piece that went out in the Daily had several errors introduced by a JFP editor in the editing process that were not in the piece submitted by Dylan Watson. We apologize to him, to Mr. Watkins and to the readers for allowing this piece to go public without sufficient copy-editing.

Great job Jackson Free Press! You picked Mr. Watkins, a great person to recognize on the Dr. Martin Luther King holiday. Hope your young readers understand the struggles and sacrifices that were made. I do!

The photo used here, along with many of the other photos in Breach of Peace, are originally from the Sovereignty Commission Online collection in the digital archives at the Mississippi Department of Archives & History. Mr. Etheridge credits MDAH in his book. The Sovereignty Commission collection is available online, along with many other MDAH collections. Even more resources are available in the William F. Winter Building's Reading Room at 200 North St. downtown.