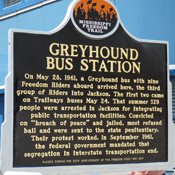 This marker now identifies the renovated Greyhound bus station in downtown Jackson as the site of the 1961 Freedom Rides, where activists protested segregated bus stations.

"I went without my parent's knowledge. They had no idea until I appeared in the newspaper. I wouldn't dare tell anyone," said Davis, who attended the unveiling of a Freedom Riders marker at the renovated Greyhound bus station in downtown Jackson this morning. "Many parents didn't know who the kids were, so a lot of parents were checking the papers looking for their own children."

Davis, a Jackson resident at the time of the ride, said he didn't expect to actually be a participant.

"I didn't plan to be on a bus, but once I heard a presentation for the rides, and then I heard the old Mississippi governor reference the Freedom Riders as 'these outside agitators,' there was no going back. 'Oh, my God,' I said, 'I have got to be on this now.'"

Davis described rotten treatment at Parchman Penitentiary after authorities arrested him and his companions for trying to integrate the bus station.

"They took away our mattresses, and made us sleep on springs, and they blasted the air-conditioning and tried to freeze us," said Davis, who now lives in New York. "There was a lot more of that treatment, too. I'm sure you've heard the stories. It was awful. Still, I don't think things would've changed without a little help."

That was then. Today, the city of Jackson joined the Mississippi Freedom Foundation in hosting a six-day celebration of the Freedom Rides, including Freedom Rider reunions and this morning's celebration at the bus station. The foundation has been planning the reunion for two years and setting up programs, ceremonies, visits, exhibits, oral histories, and education and training forums. Riders and people willing to soak up the history of the Rides spent the week traveling the state, visiting historically black colleges, Parchman Penitentiary, the Fannie Lou Hamer Memorial, and Money, Miss., the site of the murder of 14-year-old Emmett Till, a case that became a lightning rod for the Civil Rights Movement.

"What we have done often teaches a lot more than what we say," said Blount, who added that the work of the Freedom Riders left a strong impression upon youth.

Robert Parker Adams, an architect whose firm renovated and now occupies the aging Greyhound station, said he regretted the loss of many historic places that did not manage to survive into the modern day.

Barbour unveiled the marker, after declaring that the state's' young people "will learn a lot from this monument" about the story of the Freedom Trail and other historically valuable places.

On Sunday night, during the opening reception for the Freedom Riders at the Jackson Marriott, Barbour apologized to the group on behalf of the state for their treatment in 1961.