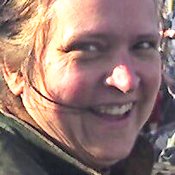 Her desire to make a difference in the world instinctively drew Valerie Wells to the field of journalism.

"I had a passion for telling the truth," she says.

Wells, 47, was born and reared in Mississippi. Her parents moved back to the Magnolia state from South Carolina so their baby could be born here.

Following her idealism into college, Wells majored in journalism at the University of Southern Mississippi. It was there that one of her professors almost destroyed her budding career as a writer.

"He told me I was a stupid teenager," she says.

Unclear what her future should be, Wells joined the Air Force in 1984, becoming a medic. The military, she says, has a systematic approach of instilling an "anybody can do anything" attitude in its recruits, which had Wells re-evaluate her career goals. She remembers thinking there was no reason she couldn't be a journalist, despite her old professor's damning remarks.

After leaving the Air Force in 1988, Wells went back to school in Eastern Washington University in Washington state. It wasn't long before she found herself back in Mississippi, and between rearing her boys, Wells established herself as a journalist.

"I still had that idealism," she says, adding that one of the things she loves about her chosen career is that she's always learning something new. Whether it's discovering the inner workings of city government or attending lectures and events, Wells feels privileged to pursue her passion, something most people don't have the opportunity to do.

"You get this great education," she says of being a journalist.

During a stint in the corporate news arena, Wells says she longed for a change of pace from doing stories that didn't seem to make a difference. Once again, she found herself casting about for an outlet where she could follow her heart.

The Jackson Free Press offered her that opportunity, she says. For Wells, the JFP has the combination of idealism, honesty and courageousness that she was looking for.

"I really, really love it," she says about freelancing for the JFP. "It's so refreshing."

Today, Wells calls Hattiesburg home. She and her husband of 23 years, Brett Benson, have two grown sons, Benjamin and Julian.

Wells is the JFP's Freelancer of the Month for September, having filed stories like "Ain't Got Justice, Yet" and "Mississippi Hosts Anti-Bullying Conference." Look for more of her work throughout the JFP, including a cover story soon.

Valerie is an editor's dream writer. That's all. ;-) Thanks, Valerie, for your great work.