[Rob In Stereo] The Gaslight Anthem: Not Your Average Garden Variety Band 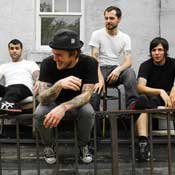 The Gaslight Anthem pays homage to Bruce Springsteen with its energy, but the band's exclusive sound could be the next evolution of New Jersey rock ‘n' roll.

Bruce Springsteen casts a large shadow over New Jersey. Every rock band from the state needs to inevitably face comparisons to the man, no matter how similar or dissimilar their sound. Few musicians are as strongly and intrinsically tied to their home state as Springsteen is to New Jersey.

The Gaslight Anthem is the latest band from the Garden State to step out of their forefather's shadow. Musically, the band demands your respect. It is a true rock ‘n' roll band that never skimps on the guitars and demonstrates a genuine care for songwriting. It also doesn't hurt that lead singer Brian Fallon sounds like a vocal love child of Springsteen and Paul Westerberg, the great Replacements' vocalist. Unfortunately, the band's newest album "American Slang," can't measure up to the best Replacements or the best Springsteen.

The Gaslight Anthem clearly owes a great deal to Springsteen, demonstrating his trademark energy in abundance on both "Slang" and the band's debut album, 2008's "The '59 Sound." Springsteen's inspiration is also present in the lyrics, which have a sharper personal edge injected in them than do most rock lyrics.

Unfortunately, the focus on Springsteen the individual leads The Gaslight Anthem to overlook the importance of The E Street Band, the group that really kept his sound coherent. While Springsteen's best songs nearly uniformly feature a dominating guitar, they often also have David Sancious' or Roy Bittan's keyboards or Clarence Clemons' saxophone lines coaxing the melody along. This assures a tonal variance to the heavy electric instruments, which are still indisputably the engine of the song. Take these secondary instruments out of many of Springsteen's songs however, and you're left with a jumble of noise. This is what the Gaslight Anthem is giving us on too many songs.

Most of the songs on "American Slang" have clearly defined, inventive beginnings and ends, but a mess of muddiness lies in between. Many songs devolve into a wall of heavy guitar and bass as a single, semi-melodic guitar line plays above it. What results is an electric-instrument overload that is just not very appealing. "Stay Lucky" and "Orphans" are two songs that start with promising riffs, only to get swallowed up by a canyon of noise.

The songs that try to change this structure are similarly problematic. Ballads "The Queen of Lower Chelsea" and "We Did it When We Were Young" both struggle to dial down the energy without sacrificing the intensity that makes the rest of the record strong.

On the other hand, "Bring it On" is a song that basks in a catchy melody and gradually escalating vocals, while not getting overwhelmed by the guitars. It provides a glimpse of what the band could be should they add a bit of finesse to their sound. The title track is also a well-constructed song driven by a simple, yet inspired, guitar riff.

The Gaslight Anthem has an ear for pop and punk music. Whether the band can learn how to reconcile and fuse the two will determine its longevity and will show if it is truly the next step in Jersey rock's evolution.