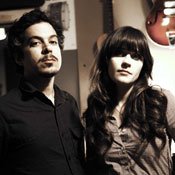 Actress Zooey Deschanel (right) has made a successful foray into the musical world as a singer with Mr. Ward (left), a success that has eluded others attempting a crossover.

There are many reasons for She & Him's "Volume Two" to be terrible. To begin with, the face of the group is Zooey Deschanel. For those unfamiliar, she is the actress who had lead roles in "(500) Days of Summer" and "Yes Man." She is the latest actress to be held up as the paradigm of "cool," supplanting such previous luminaries as Kristen Bell and Scarlett Johannsen. The media increasingly look to these actresses for insight into new-wave offbeat style and Deschanel, apparently drinking her own Kool-aid, has not let them down.

Movie stars taking up music is a well-worn idea that rarely pays off creatively. Their albums are usually either straight-up bad, as was the case with Johannsen's dreadful Tom Waits' cover album, or the band is never able to separate itself from their celebrity member. Billy Bob Thornton had a well-documented meltdown on a radio interview when the host mentioned his film career while introducing the band. Deschanel strives to buck these trends with She & Him, and she is overwhelmingly successful.

She & Him is a collaborative between Deschanel and folk musician M. Ward. Putting herself under Ward's musicianship and tutelage was a smart move. She willingly lets her vocals take a back seat to the music. The instrumentation and production is always foremost on "Volume Two." Ward presents us with a slightly minimized and countrified Wall of Sound. Deschanel's voice blends beautifully with the sound, allowing it to become part of the sonic tapestry as opposed to attempting to sail over it.

Aside from the standard country and folk instruments, the production features lush, symphonic instrumentation and beautiful harmonies. One can hear pangs of Dusty Springfield and Michelle Phillips in Deschanel's voice, while Ward's harmonies provide a perfect counterbalance. Thematically, the lyrics can bounce between heartbreak and playfulness without missing a beat.

Deschanel's voice throughout the record exhibits an inherent vulnerability that adds to the poignancy of the songs. What she lacks in vocal range, Deschanel more than makes up for in expressiveness. In "Thieves," the album's opener and one of its most inspired songs, her vocal fragility and subtle vibrato inflections sells us on, and invests us in, her emotions.

The duo never let up after this early highpoint. "Don't Look Back" could easily pass for 1950s girl group pop in both production and vocals, which I am assuming She & Him would take as a great compliment. The Caribbean beat on "Lingering Still" is a great change of pace and offers some of Deschanel's most assured lyrics. "Gonna Get Along Without You Now" and "Home" both present a playful side to the group. You can almost hear Deschanel smiling as she sings over both these songs.

She & Him's "Volume 2" is one of the most satisfying pop albums of the year. What it lacks in ingenuity it more than makes up for in inspiration. As someone who has never been a fan of Deschanel the actress, I have left "Volume 2" firmly in support of Deschanel the singer. Perhaps it's time for her to quit her day job.