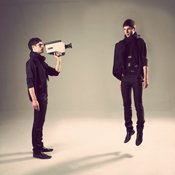 Prince recently released his newest single, "Cause and Effect," (Youtube link) which is predictably tame and in keeping with the trend of his singles in recent years. It is appearing more and more that Prince's glory days are behind him. We haven't gotten a signature catchy, ribald single in the vein of "Little Red Corvette" or "Sexy MF" in years. Luckily, the market for Prince imitators remains ripe. It seems every year an album comes out striving to be the great, lost Prince album.

While these imitators' albums generally capture the raunchiness of Prince's lyrics, they rarely venture out of the guitar and synth-based pop sound that made Prince so huge in the early '80s. What these records are doing is imitating Prince's sound without trying to grow it. These artists, while offering us fleeting hope that they may represent the next step in this sound's evolution, inevitably leave us retreating to our copies of "Dirty Mind."

Dan Black, a British import, is the latest to vie for the "Heir to Prince" title. He demonstrates an ear beyond just the synth-guitar sound on his debut LP "Un." It is a surprisingly assured and ambitious effort for a debut album. While keeping everything grounded in his electronica/hip-hop comfort zone, Black displays a deft incorporation of R&B, rock and even disco.

The album opens with "Symphonies," a near flawless pop song. It is a perfectly titled track with lushly orchestrated strings, a choral background and multilayered harmonies. The instantly recognizable "Umbrella" drum sample gives the song its hip-hop edge, and, indeed, rapper Kid Cudi contributes a verse on the reprise at the end of the album. It is the most unique-sounding song on the album and also the best.

This is not to say there is a massive drop-off in song quality, though. Black successfully draws in elements of disco and hip-hop, giving a fresh edge to the record. If he weren't singing over "Yours," then any number of rappers would be lined up around the block to take a bite out of the beat. "Pump My Pumps" has a bass line that could have easily been pulled from one of Chic's hits.

The most interesting development on the album comes in its second half with "Cigarette Pack" and the gorgeous "Life Slash Dreams." With both these songs, Black crosses into U2/Coldplay territory. The fact that Black's chameleonic voice is able to smoothly make the transition between hip-hop and rock should not be understated. Music is littered with artists who have tried unconvincingly to make that switch (Coldplay's own Chris Martin is one); their voices simply don't translate to the other genre.

Dan Black's "Un" is as impressive a debut album as you are likely to hear this year. While there is room to grow—specifically in truly finding his own voice—Black demonstrates the chops needed to achieve this growth. Should he find it, he could have a home on the pop charts and critics' best-of lists for years to come.