[Rob In Stereo] Inching Toward the Present 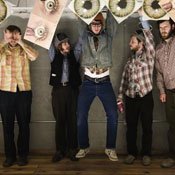 I rolled my eyes upon first hearing Dr. Dog's flagrant aping of The Beatles and The Band. Critics' main disparagement continues to be over its derivative sound, and I was in no position to disagree; however, the more I listened to the music, the more I recognized that there was something going on here deeper than mere imitation. The band's songs were well structured and the lyrics weighty, yet edgy. Furthermore, the evolution Dr. Dog displayed over its relatively brief career suggested it was only a matter of time until the band broke its own ground and shook the "Beatles clone" label. "Shame, Shame," their newest album, is the band's furthest push yet to doing just that.

Dr. Dog is a five-piece band co-founded and co-fronted by vocalist/guitarist Scott McMicken and vocalist/bassist Toby Leaman. McMicken delivers cerebral and nuanced lyrics with a restrained delivery, while Leaman leaves more to the imagination, both lyrically and vocally. Their voices and styles create an interesting complement.

While their excellent first two albums, "Easy Beat" and "We All Belong," were considerably lo-fi—often exhibiting a synthetic hiss—"Shame, Shame" has followed the track of its predecessor, 2008's "Fate," in stepping up the production values. The multi-layered first notes of the record's opening track, "Stranger," are some of the fullest sounding the band has ever recorded and the song is all the stronger for it. It is a knockout opener, and from there, Dr. Dog never lets up.

On "Shame, Shame," the band displays a new reassurance and experiments with a broader musical range than on any of its previous albums. "Later," Leaman's strongest song, veers as close to punk rock as the band has ever gotten. Featuring the fastest tempo of any Dr. Dog has ever worked with and doing away with its trademark ethereal harmonies, Leaman rails against a love interest who constantly puts him off. It's an accessible song, and everyone can relate to Leaman's palpable frustration.

This album covers various themes, but it's at its strongest when delving into the topics of desolation, dissatisfaction and uncertainty. It's a perfect triumvirate for the times we are living in, and the songs capture the emotions dead on.

"Shadow People" begins as an acoustic ballad about listlessness in the city and gradually grows in frustration and urgency until it reaches its foot-stomping climax. The haunting "Someday" is set inside the self-wallowing mind immediately post-breakup, and Leaman's expressive voice is once again able to efficiently convey the gloom of our protagonist.

The tunes culminate in the album's high point: "Jackie Wants a Black Eye." An often-devastating song about loneliness and self-loathing, it strives to find unity within both. It's poignant, but not maudlin, and its musical arrangement featuring gorgeous background harmonies and hand claps makes it work. By the time "Jackie" wraps up, it has become, oddly, the most life-affirming song on the album.

Getting the confidence to wean yourself from your influences is always encouraging. By stepping out onto its own and beginning to take musical and lyrical chances, Dr. Dog has released its best album to date.