[Rob In Stereo] Breaking Up is Hard to Do | Jackson Free Press | Jackson, MS

[Rob In Stereo] Breaking Up is Hard to Do 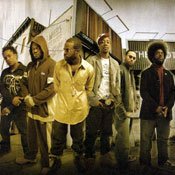 Legendary hip-hop act The Roots' most recent album, "How I Got Over," may leave loyal fans asking themselves a difficult question.

It's incredibly difficult to be objective about The Roots. It has been one of my favorite groups since I first heard "You Got Me" back in 1999. The song was the first live instrumentation hip-hop I had ever heard and is one of those songs that make you remember exactly where you were when you first heard it. I quickly went and bought every album The Roots had released and continue to do so. Throughout The Roots past few albums, though, a disturbing trend has emerged. Black Thought, the MC, has become a weight on the group.

"Things Fall Apart," the group's 1999 classic, struck a perfect balance between band and MC. The beats, while coming from instruments, were nonetheless fairly traditional, matching Black Thought's brilliant battle and backpack-style rhymes. His became a prominent name in the "greatest living MC" discussion following the release.

The much more musically ambitious "Phrenology" exposed a rift. The band was becoming more experimental and avant-garde, while Black Thought's lyrics and voice were not making a similar progression. This disparity between band and rapper has only grown since. Over the past decade, the band has surpassed the MC—a fact made even more apparent on their new album, "How I Got Over."

The beats on the album are some of the best the band has ever done. The early part of the record recalls early 1970s Marvin Gaye. The aptly titled "Walk Alone" is a near perfect atmospheric song, while "Radio Daze" has a distinct 4-o'clock-in-the-morning sound. Essentially, The Roots are back in touch with the brooding mood it delved into on 2008's brilliant "Game Theory."

The title track picks up the beat a bit in the middle of the album but still offers a gloomy urban portrait. Subsequent songs offer more head-nodding opportunities, particularly in album highlight "Right On" and the John Legend vehicle "The Fire," but the overall mood remains dark.

Black Thought's aforementioned lack of lyrical and vocal variation is noticeable from the get-go. This is not to say he is bad lyrically, but rather that his words don't mesh with the music as well as they once did. The Roots have forayed into other sounds, pushing the genre's envelope more than any hip-hop group outside of Outkast. Black Thought's rhymes, on the other hand, while remaining inarguably impressive, seem stuck in the '90s.

This is where the problem of Thought's vocal range comes into play, too. The MC's voice stays in a one-note range and doesn't convey much expression beyond stoicism, toughness and anger. He needs a greater variation to keep up with the band's genre hopping. It's sad that lesser MCs such as Dice Raw and Blu sound more at home over Roots beats, often just because they are blessed with the virtue of restraint.

"How I Got Over" is another terrific offering from one of the most consistent acts in hip-hop. The band continues to push itself musically and thematically, consistently rewarding the listener. Unfortunately, it does little to quell the notion that band and MC may be better served taking some time apart.