Irby Wants Her Day in Court 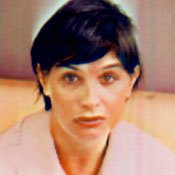 Karen Irby will go on trial in March.

Karen Irby, sentenced to 18 years in prison for the deaths of two young doctors last month, says she was forced to plead guilty, and now wants to withdraw that plea, reports WAPT. Irby was legally drunk and behind the wheel of her black Mercedes when the car crossed into oncoming traffic on Old Canton Road, Feb. 11, 2009, crashing head on into a pickup truck driven by Drs. Lisa Dedousis and Daniel Pogue. The two doctors died at the scene when their truck burst into flames.

Irby, 39, says her husband, Stuart Irby, who was injured in the crash, paid her former lawyer, Joe Holloman, $500,000 to represent her, but she never discussed the case with Holloman, WAPT reports. Further, Irby claims that her husband beat her just prior to the wreck, ultimately causing the accident, an assertion Holloman would not address, she says.

What an arrogant piece of trash. It's like she expects us all to forget that she was driving at 2x the speed limit while blitzed out of her skull! If she and her drunk ass husband had taken a cab or found a sober friend to take them home, those 2 people she hit might still be alive today.