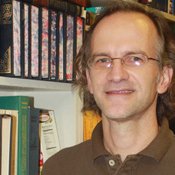 "I love my job!" proclaims Dr. James E. Bowley on his Web site. Bowley, an associate professor in the Millsaps College department of religious studies, teaches courses on the Bible and related religious traditions: Judaism, Islam and Christianity. "What's not to like about spending the day with great colleagues and students thinking and conversing and researching about religious traditions, reading beautiful or even shocking texts, and investigating intriguing religious practices?" he writes.

In addition to teaching, Bowley as spent years studying fragments from the Dead Sea Scrolls, discovered around 1950 in several caves surrounding the Dead Sea in Israel. He is considered one of the leading experts on the scrolls, which consist of roughly 900 documents dating from 200 BCE to 50 CE, written in Hebrew, Aramaic and Greek.

The Mississippi Humanities Council has named Bowley a Humanities Teacher of the Year for 2009, an award that goes to one humanities scholar in each of Mississippi's colleges and universities every year.

"I really appreciate the Mississippi Humanities (Council), and the work they do in general," Bowley said. "... What they do is promote and celebrate our humanness."

"We should notice when life is good," Bowley added, paraphrasing one of his favorite authors, Kurt Vonnegut. The humanitiesthe arts, literature, philosophy, religion and so forthare part of what brings happiness to people, he believes. "I think our Constitution has it rightlife, liberty and the pursuit of happiness," he said. "What could be better? What could be more fundamental?"

As part of the award, Bowley will present a free public lecture on Wednesday, titled "Living by Fragments."

"Looking at the fragments of the Dead Sea Scrolls has made me think about the way we look at life by fragments today," Bowley said in a release. "The lecture is not so much about the scrolls but about giving people something interesting and enjoyable to think about."

Born in 1962 in Lincoln, Neb., Bowley studied archaeology and historical geography in Israel prior to receiving his master's degree and doctorate from Hebrew Union College-Jewish Institute of Religion in Cincinnati, Ohio in 1992. He is an editor of the "Dead Sea Scrolls Concordance" and has been teaching at Millsaps since 2002. He and his wife, Bonnie, and their four childrentwo boys and two girlslive in Jackson's Fondren neighborhood.