Circle of the Sun 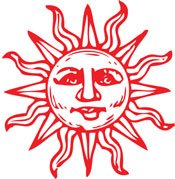 I went for a walk through Belhaven with a friend one afternoon a few weeks ago. We passed people walking their dogs and some joggers. And suddenly, it was dark at 5:30 p.m. Days only get shorter from now until the winter solstice in December. The world is darker and seems gloomier. I bask in artificial lights, but it's just not the same.

The winter solstice, around Dec. 21, is the shortest day of the year and first day of winter in the Northern hemisphere. It occurs when the North Pole is tilted 23.5 degrees away from the sun. After the solstice, days gradually extend.

The word solstice comes from the Latin words sol and sistere, meaning "sun stands still." In the ancient world, solstice observances celebrated the return of the growing season.

"When days start getting longer again, there's more hope for crops to grow," says Dr. James Bowley, a religious studies professor at Millsaps College. Because people celebrated the return of crops, religions associated the winter solstice with concepts of birth and rebirth. "Any religion or culture that views life as cyclical is probably going to celebrate solstices," Bowley says.

Beginning in the third century, Romans celebrated the birth of many gods on Dec. 25. This was the day the Romans thought the sun began its movement north, the day of the sun's rising. A century later, Christians began celebrating the birth of Jesus the same day.

Other symbols now associated with Christmas, like mistletoe, holly and the Christmas tree, come from pagan solstice celebrations. Some Christian groups, such as Jehovah's Witnesses, choose not to celebrate Christmas because of its pagan roots. "Any religion that survives adapts to take in ideas from the surrounding cultures," Bowley says.

In Judaism, Chanukkah has ties to the solstice. In the second century BCE, King Antiochus of Syria took over Judea and restricted the practice of Judaism. Chanukkah celebrates the Jews reclamation of their Temple and the light in the Temple that lasted eight days, when there was only enough oil for one day.

The Zoroastrian solstice celebration of Shabe-Yalda commemorates the sun. "It is a monotheistic religion, but the sun is a primary image of God," Bowley says. "There is still an Iranian holiday, which started in Zoroastrianism, which refers to the rebirth of the sun. It's a leftover holiday that didn't originate in Islam." People light bonfires, signifying the birth of the sun, feast and share stories during the night.