Cosmo Tots and Blithe and Vine 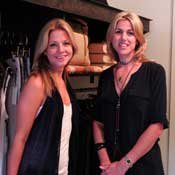 Missy Massey (left) and Liz Spratlin (right) have been working together since 2009 to provide stylish clothing and accessories for women and kids.

Casual, elegant and modern. That's how Cosmo Tots and Blithe and Vine co-owner Liz Spratlin describes her well-lit and simply decorated store. Tammy Wynette plays softly in the background, enhancing the calm atmosphere of the space. The store's white walls ensure that the racks and stacks of clothing are its main focus.

"(Cosmo Tots) is a different point of view. I have three kids of my own, and a lot of the clothing that I found around Jackson was very traditional," Spratlin says. "I thought that the previous owners had a great concept and brought in some more contemporary brands that I really related to as a mom."

In October 2009, Massey, 28, and Spratlin, 40, opened Blithe and Vine, a women's clothing store, in the same space. Spratlin says everything they buy falls in the category of casual elegance, matching the atmosphere of the store.

The name Blithe and Vine stems from words both Massey and Spratlin like. Blithe means happy and carefree, and vine refers to family—both in terms of the concept of the store, and the fact that Massey and Spratlin are cousins. They say working together is fun.

By combining Cosmo Tots and Blithe and Vine in the same space, Massey and Spratlin created a hybrid store for mothers and children. "I think having the children and the women in the same space has worked out really well," Spratlin says. "Most of the folks who are in here shopping are moms. We get a lot of crossover. It's sort of a one-stop shop, so to speak. It's just a fun combination."

Spratlin prides the store on being something different for Jackson.

"It's a different perspective on how you dress. We hear all the time from our customers that they love coming in here because we have such a unique and different selection," Spratlin says. "They feel like when they go to the larger stores, a lot of things are repetitive, and they don't feel like they're getting something unique and of value for their money."

One of the co-owners is at the store 99 percent of the time, Spratlin says, working and making sure the store is the way they want it.

"We feel it makes a big difference to always have the owner here working the floor and working with customers," Spratlin says.

Spratlin and Massey grew up in Biloxi. The cousins both have bachelor's degrees in journalism. Spratlin earned hers in 1992 from Southern Methodist University in Texas. Massey graduated in 2007 from the University of Mississippi.

Wanting to be closer to home, Spratlin moved to Jackson in 1992 from Washington, D.C., where she worked as a press secretary for former Sen. Trent Lott. Before opening Cosmo Tots and Blithe and Vine, she was vice president of public relations for Maris, West and Baker, a Jackson ad agency in 1998 to 2003.

Massey moved to Jackson after she married in 2007. Before her venture into retail, she worked at Gresham, Smith and Partners, an engineering firm.