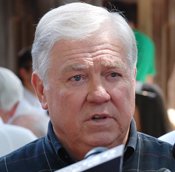 Among the bills headed to Gov. Haley Barbour for his signature is the Uniform Abduction Prevention Act.

A 2008 case where a Yalobusha County woman attempted to sell her granddaughter for $2,000 and a car prompted legislators to enact a law making selling children in Mississippi a crime, reports the Memphis Commercial Appeal.

Police arrested the woman for a probation violation, but could not charge her or her daughter, the child's mother, with selling the child because in Mississippi, the practice is legal.

Sen. Doug Davis, R-Hernando, added the bill he wrote in response to the case to the Uniform Abduction Prevention Act, which the Mississippi House passed previously in the session. That act gives judges the power to restrict where parties in child custody cases could take their children.

"If signed by Governor Barbour, this legislation would give law enforcement the tools they need to better protect some of the most vulnerable in our state," Davis told the Appeal. "Protecting the children of Mississippi is one of our greatest responsibilities, and it is for that reason I am excited to see this go to the governor."

The child-selling portion of the combined bill would make buying or selling -- or attempting to buy or sell -- a child punishable by up to 10 years imprison and/or a $20,000 fine.

"There was not a dissenting vote on either side," Davis said

The bill is on its way to Gov. Haley Barbour for his signature.

So now what am I supposed to do with all of those kids I bought on ebay?!?

This wasn't already a law?

One of those epic moments in lawmaking, I'm sure. That singluar instance where everyone realizes that, yes, it is(was) legal to sell your children. Tho I'm sure the Feds have a law against it... right?

Iron, from my little bit of research, federal laws only kick in if there's prostitution or pornography involved and if there's trafficking across state lines.

So, as long as it was in state it would have been legal? I guess we can be thankful it took this long to come up.