The Tangled Web of Hate 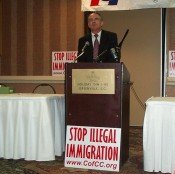 The Southern Poverty Law Center counts the Council of Conservative Citizens as a "Neo-Confederate" hate group, which, like the more radical League of the South, fights for the rights of "the Confederacy." The CofCC stops short of calling for a second secession from the Union. Neo-Confederates unite behind goals of preserving Confederate monuments and honoring the Confederate battle flag, in addition to fostering "pro-white," anti-immigrant politics.

Jared Taylor, keynote speaker for this year's CofCC conference, is editor of American Renaissance magazine, which describes itself as "America's premiere publication of racial-realist thought."

"Race is an important aspect of individual and group identity. Of all the fault lines that divide society—language, religion, class, ideology—it is the most prominent and divisive," Taylor wrote. "Race and racial conflict are at the heart of the most serious challenges the Western World faces. ... Attempts to gloss over the significance of race or even to deny its reality only make problems worse."

Taylor has declared integration a failure, and points to African American and Hispanic crime rates as proof. He questions the ability of blacks to live successfully in a civilized society, and has said that Central Americans are organizing to invade the rest of North America. All the while, Taylor claims not to be a white supremacist, countering that he is a "yellow" supremacist, because he believes Asians to be the most advanced people followed by whites, with those of African descent bringing up the evolutionary rear.

Neo-Confederate group members often "cross pollinate" other white supremacist groups, using similar rhetoric and relying on the same sources for their "ethnic solidarity" (i.e. pro-white) stances. The Confederate Society of America, for example, has ties to the CofCC and the League of the South through its president, Craig Maus, who has held leadership posts in both organizations. And the Sons of Confederate Veterans publication Alabama Confederate, which has condemned the Emancipation Proclamation as unconstitutional, has included articles by League of the South members.

Ethnic solidarity is a hallmark of other "paleo-conservative" groups such as the Family Research Council, whose president, Tony Perkins, has connections with the CofCC and former Louisiana KKK Grand Wizard David Duke. Paleo-conservatives believe most American conservatives have "sold out" to immoral liberality and are "corrupt tools of the establishment," and include such mainstream stalwarts as Pat Buchanan and Robert Novak.

It's the groups' mainstream connections that make their rhetoric a part of every day conservative thinking in the United States. League of the South member Michael Peroutka, for example, was the Constitution Party's 2004 candidate for president. The Party is dedicated to restoring "our government to its Constitutional limits and our law to its Biblical foundations," echoing rhetoric from political independents such as the American Liberty Alliance, one of the groups behind the recent "tea party" rallies. One Constitution Party state affiliate is the Alaska Independence Party, which counted among members Todd Palin, husband of Alaska governor Sarah Palin. As recently as 2008, Gov. Palin videotaped a welcoming speech for the organization's conference.

Through outward moderation of their radical-right rhetoric, such parties are gaining membership of conservative Americans distrustful of both Republicans and Democrats, and threatened by the economy.

Tea parties rally around anti-immigration, anti-union and anti-taxation platforms. And while those grass-roots "parties" don't directly advocate racism, they attract white-supremacists like flies to honey, with no indication of turning them away. Rally signs prove the point: "Obama's Plan / White Slavery," and "American Taxpayers are the Jews for Obama's Ovens," are just two of the racist signs held high.

At the Jackson tea party in April 2009, a speaker cited school integration as a sign government "meddling" doesn't work.

It is rhetoric fomented by right-wing "entertainers" like Rush Limbaugh, who repeatedly states that he wants President Barack Obama to fail, calling his programs "socialism" and "fascism." It is rhetoric picked up and passed along as mainstream commentary by local columnists at the Northside Sun who say blacks should give thanks every day for slavery, compare Obama to Hitler, and repeat the ridiculous myth that Obama plans to turn the U.S. into a "Muslim theocracy."

Such rhetoric has at its heart the racist and anti-immigrant stances of well-known and politically incorrect hate groups like the Ku Klux Klan. In troubled times, groups that can point to a common enemy don't need to justify their hated, simply to consolidate it.

ID
149094
Comment
Thank you for printing this article. The public needs to know who pulls the strings to make the puppets dance in the name of "less taxes, less government" etc. There are some very dangerous people on the kook right that have a lot of the mainstream conservatives fooled.
Author
Jeffery R
Date
2009-06-28T10:40:43-06:00