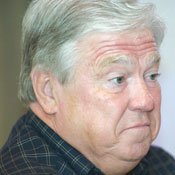 Leslie Bowlin lay in wait for his young victim, watching her roommates leave their shared apartment in the Canterbury Townhouses in Starkville one by one for the Christmas break. When she was finally alone, Bowlin broke into the apartment and raped her at gunpoint.

"He hit her over the head so hard with the gun butt, it shattered the butt," said Mississippi Attorney General Jim Hood.

Bowlin then proceeded to tie up his victim, a Mississippi State University student, threw her into his truck and headed for the woods. There, while dragging her by a rope around her neck, an unsuspecting deer hunter interrupted Bowlin. His victim took her chance to escape.

"She broke loose and ran toward the hunter," Hood said, while Bowlin ran the other way.

For his crimes that day, Dec. 15, 1990, a jury convicted Bowlin in 1991 for rape, kidnapping, aggravated assault and burglary. He received a sentence of life in prison plus 25 years.

On Dec. 17, 2008, Gov. Haley Barbour granted a 90-day furlough to Bowlin, now 40, raising a firestorm of controversy similar to the one that followed his suspension of convicted murderer Michael Graham's life sentence last July. Graham shotgunned his ex-wife, Adrienne Klasky, to death in broad daylight in 1989 after stalking her for three years.

Upon receiving the Governor's furlough, Bowlin traveled to his parent's home in Sicily Island, La., where he reported to the Catahoula Parish Sheriff's office as a sex offender. It was the first time officials in Louisiana knew that Bowlin was in the state. Reportedly, the documents he presented to the sheriff indicated that Bowlin was subject to electronic monitoring; however, officials at Parchman reportedly did not fit him with a monitor when they released him.

Once they heard about Bowlin's furlough, attorneys general in Louisiana and Mississippi immediately began a campaign to have Barbour rescind his order.

"For a governor to be letting somebody out for 90 days is unbelievable," Louisiana Attorney General James "Buddy" Caldwell said to the Associate Press. "That is insane."

"The presence of this inmate in Louisiana without real or legal supervision directly impairs the safety of the residents of that state and community," Hood wrote in the letter, dated Christmas Eve. He then added, "I urge you to retract your release of Bowlin as soon as possible in order to prevent the liability to which the State of Mississippi is currently exposed."

Emma Devillier, an attorney in Caldwell's office, said that Louisiana has requested an opinion from the Interstate Commission for Adult Offender Supervision as to whether Barbour violated the terms of the national sex offender compact. That compact, signed by all 50 states, provides supervision strategies for sex offenders by controlling their movements, and may provide grounds for a lawsuit or sanctions against Barbour and Mississippi.

"It was never envisioned that (the compact) would cover somebody with a life sentence," Devillier said. Under the compact, a state must provide timely notice to another jurisdiction and to the victim before releasing a sex offender, and provide both with an opportunity for input. But those rules generally refer to offenders after they've served out their sentences.

"We've asked the commission to review the situation and clarify the rules," she said. "It's a very unusual circumstance."

Devillier added that she had never seen a similar case in her 20 years of practice, and said that no one notified Bowlin's victim, either.

"She was very upset about that," Divillier said.

It is not clear why Barbour pinpointed Bowlin to grant him a furlough. In documents Bowlin presented to the Catahoula Parish Sherriff's office, he was to get a psychiatric evaluation in Mississippi and was free to leave his parent's home only for those appointments. But Sicily Island is about 20 miles from the Mississippi state line, and Parchman authorities commonly approve psychiatric evaluations in prisonpsychiatrists had already evaluated Bowlin at the prison, according to Hoodbegging the question of why Bowlin, a violent sex offender, received a furlough at all.

Dan Turner in the governor's press office listened to but did not provide answers to questions from the Jackson Free Press.

Hood indicated that he has questions as to whether Barbour has furloughed other prisoners without informing his office, questions he shares with Caldwell.

"I have asked the governor for all records of any prisoners released, for furloughs or whatever, to see who all is out there," Hood said, adding, "If you turn (furloughed prisoners) out without monitoring, you open yourself up to liability."

Currently, the governor has nearly carte blanche to grant reprieves and pardons, and to remit fines for convicted criminals in Mississippi.

"This type of power and authority should not be invested in any one individual," Rep. Brandon Jones, D-Pascagoula, told gulflive.com. "To override the entire justice system in this way is breathtaking."

Jones and co-sponsor Warner McBride, D-Courtland, are proposing legislation this year to restrict the governor's power to free prisoners, but that bill faces the hurdle of changing the state constitution. They have introduced two other bills that will be more likely to pass the current legislation, and Sen. David Baria, D-Bay St. Louis, will be introducing similar legislation in the Senate.

"The idea here is that to the extent that we can bring in people that know specifics of each case, and that can flush out some of the details, we think that's important," Jones said. "In (the Graham and Bowlin) cases, there are facts in the case file that were presented at trial that suggest that these are men who certainly should serve out the full duration of their sentence."

Barbour seems to have a penchant for granting relief to men who abuse or kill women. Last year, in addition to suspending Graham's sentence, he pardoned Bobby Hays Clark, who shot and killed his girlfriend Veronica Conner in 1996; Paul Joseph Warnock, who shot Carol Ann Hall in the back of the head in 1989; and Clarence Jones, who stabbed Carla Smith 22 times in 1992. Graham, Clark, Warnock and Smith had all worked in the governor's mansion as trustys.

"There needs to be some type of assurance that before these extraordinary steps are taken involving someone who has been convicted, that the right information is put before the governor," he said this week.

"People put a certain degree of trust in a justice system.  They deserve to know why a single politician would override the court's decision."

this doesn't surprise me. anyone who has objectively analyzed his record can see that barbour is one of, if not THE worst governor in the country, including palin and blago. his one "shining moment" was Katrina, but that's really only because the media is too lazy or uninterested to actually go down to the coast and see how it's still effed up other than the casinos. over his tenure, nothing in the state has improved more than marginally, we have the weakest domestic violence laws in the nation, education still ranks near or at the bottom, we still don't fund early childhood development, jobs are scarce, and our collective health is lousy. but hey, cigarettes are still cheap, so we can smoke our problems away...