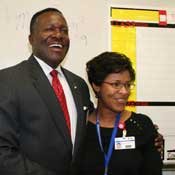 Having worked as a media professional for several years, Donaldson knew that there was more she wanted to accomplish, according to a release. It was not until she became a mother that she discovered the field of education and became qualified to teach through the alternate route certification process.

"The art of teaching is bigger than the subject one teaches," Donaldson said. "As an English teacher, I often tell my students, ‘It's bigger than English.'"

Donaldson will receive a $5000 salary supplement from the Mississippi Department of Education and represent the state in the National Teacher of the Year competition in Dallas. She will also meet President and Mrs. Obama at the White House when she participates in a Rose Garden recognition ceremony. Donaldson will be sharing her expertise through various presentations and activities for the improvement of education in the Magnolia State.