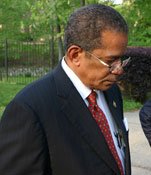 The trial of Mayor Frank Melton is set to begin Wednesday.

At a rancorous pre-trial hearing today, U.S.District Court Judge Daniel Jordan denied Michael Recio's motion to sever (PDF) his trial from that of Mayor Frank Melton. Recio had argued that the mayor would testify in his defense at a separate trial for the Aug. 26, 2006, raid on the 1305 Ridgeway St. duplex and that Melton's testimony would exculpate him. In support of the motion, Recio included an affidavit from Melton stating that Recio did not "participate in any way in any activity aimed at the destruction of the house." The court also denied an attempt by the defense to bring up alleged past allegations against bodyguard Marcus Wright, prompting the prosecution to claim that the defense was trying to circumvent the gag order and discredit Wright in the media.

Federal prosecutors countered that Recio's lack of participation was not enough to clear him of wrongdoing. As a law enforcement officer, Recio was legally obligated to attempt to stop the Ridgeway demolition, they argued. "For purely personal reasons, I had leaned towards granting [the motion]," Jordan said in his decision. He did not grant it, he said, because Recio's and Melton's defenses were not mutually antagonistic and because the mayor's affidavit did not indicate that his testimony could not exculpate Recio.

Tempers flared later in the day, as Jordan heard arguments on a motion (PDF) by Melton and Recio to dismiss the case. Attorneys for the co-defendants filed the motion late Friday, accusing the government of "prosecutorial vindictiveness" for failing to promptly disclose JPD Internal Affairs files on Melton's former bodyguard, Marcus Wright, who will testify against the mayor and Recio as part of a plea bargain.

A visibly incensed Mark Blumberg, attorney for the prosecution, called the motion "without a doubt one of the most irresponsible pleadings I have ever seen in my career." Blumberg accused defense attorneys of attempting to circumvent a gag order on the case and feed a media frenzy by including in their motion an affidavit alleging sexual misconduct by Wright. At the government's request, a federal magistrate judge restricted access to the affidavit a few hours after it was made available online.

Acknowledging "the histrionics on both sides," Jordan denied the motion to dismiss on the grounds that defense attorneys had received the potentially exculpatory IA files in advance of the trial.

In another blow to Melton's defense, Jordan denied a motion to exclude statements (PDF) that Attorney General Jim Hood and JPD officers made to Melton warning him about the dangers of unconstitutional searches and seizures.

To quote judge Mills Lane just before some fighter get the crap beat out of him, "Let's Get It on." This has dragged on long enough. Frank gotta pay up or whup the feds too. We don't need any continuance. We need closure, whatever the heck that is. No where to run, no where to hide. So lets fight and see who's the baddest!

Now they're talking about a couple of weeks delay. Why delay the inevitable? The caster oil won't taste any better in 2 weeks. Frank and Recio don't need any more wiggle or running room. I'm ready to see some extreme fighting!

Two Bits, Four Bits, Six Bits a dollar nobody wants to hear Melton hollar!!! The time has come for Melton to answer for all the lies and the broken promises he made to his friends and associates including the citizens of Jackson. Melton, how does it feels? waiting, worrying watching your reputation destroyed. Now you will be dealt Justice. You turn your back on your friends and now you are the one who's family wll be embrassed and have to suffer through this ordeal. I really feel sorry for the Wright and Recio their support of you has destroyed their reputations and has hurt their families.

Melton ego is melting and he still refuses to ask for forgiveness! There are several other individuals that should be standing along with Melton, several Council members, two City attorneys, several department directors and special attention should be given to the City Council members that are planning on running for Mayor of Jackson. The corruption runs way deeper than just Melton and it's time to hold those people accountable also. We also must include several recently demoted or reassigned employees that are currently being pay with taxpayer dollars. Melton will be a fool if he doesn't expose the illegal activity of his appointee's that sold him out then he really is a fool. Melton, the Federal Jail have more than one vacancy in their jail. Why should you be the only one serving time? Expose the others while you still have a chance!!!!