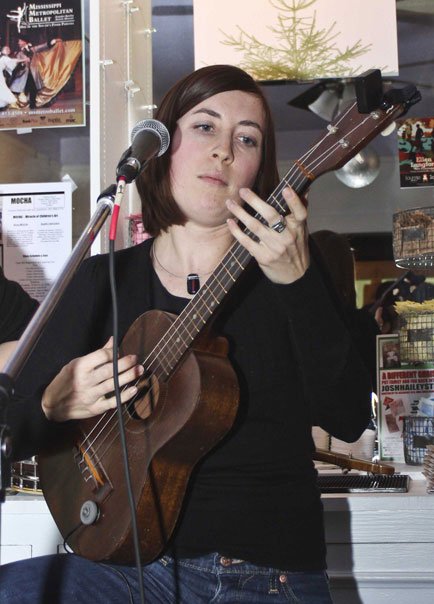 As friends Emily Baker, 28, and Steve Harvey, 26, peruse the lunch menu at High Noon Café, they reminisce about a particular brunch there one month before when the duo hatched a plan to produce a Christmas CD completely produced in Jackson by local musicians.

Baker and Harvey both play musicBaker plays casually with friends, while Harvey is a member of the band Eating Diamondsand the pair discussed creating a CD to have something tangible to listen to after playing music. Because it was early November, a Christmas album seemed like the perfect project.

"There was something about the time frame, and I think, somehow a Christmas album takes the pressure off a little bit, you know? It was just kind of an easy place to start," Baker says.

The album, "Merry Christmas Jackson," is a 14-track contemporary indie/folk CD with a wide array of musicians and genresfrom photographer Josh Hailey's synthesized R&B version of "What Child Is This?" to the folksy "Breaking Up Christmas" by the Scramblers to local pastor Stacy Andrews' humorous, reggae-style "Christmas Time." Baker and Harvey also recorded songs on the album.

Other highlights on the album include Ttoccs Rekarp's "Little Electro Boy," which is an ambient tribute to the traditional "Little Drummer Boy," and is complete with a hidden outro consisting of "Merry Christmas" chants over an airplane PA system. Harvey also sings a Belle and Sebastian-reminiscent duet with Katie Fortenberry, "I Would." Synthar's "Pawnshop Christmas" tells of the wide array of odd, gently used gifts such as "guns and toys" you find in pawnshops. The track's bridge has actual Nintendo Gameboy sounds.

Celebrating the CD's release on Dec. 12, Baker and Harvey were relieved at how quickly they were able to put the project together. Luckily, the pair was well connected, and things quickly fell into place.

"Several of the artists have studios set up in their houses so everyone was able to pretty quickly record their stuff.  It was like we had all these resources that were available," Baker says. "Like, the Dixie Nationals song ("Don't Come Home For Christmas"); Bryan Ledford wrote that song, and they recorded it the next day."

Of the 14 tracks, only three are traditional Christmas songs with each musician creating original lyrics and music for the remaining 11 songs.

"Merry Christmas Jackson" is available for $10 at Sneaky Beans, Lemuria, High Noon Café and One to One Studio.